‘Will & Grace’ Cast Come Out For New Season 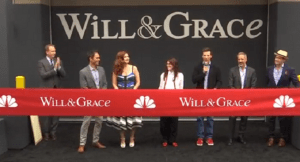 The cast of “Will & Grace” turned out on Wednesday to cut a ribbon to announce the start of filming of their new season, 11 years after the series originally wrapped.

Garcetti gave the cast and crew a commemorative certificate and paid homage to the show, saying, “When you think back to when the show started, think about what we didn’t have. As depressing as these days may feel, we didn’t have marriage equality in every single state of this nation.

“We didn’t have a place where people were looking to see how TV could be at the cutting edge and still were about one per cent of characters who could speak were out. It’s so important to bring back the characters that we have here now more than ever.”

Set in New York, “Will & Grace” follows the ups and downs of the lives of two gay men and their two female best friends. The Emmy-winning show originally premiered in 1998 and ran through to 2006.

During his speech, Eric McCormack, who plays Will, spoke about how he was going to be kissing a man again and then co-star Sean Hayes obliged.

The new season is expected to air in September.