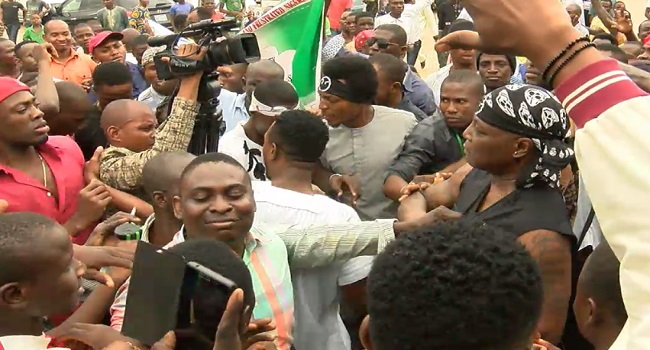 Nigerians have taken to social media to express their views on the attack on Charly Boy and other members of the Concerned Nigerians group.

The group which entered its 8th day of protests on Tuesday, demanding that the President, Muhammadu Buhari resumes work or resigns from office, took their campaign to the Wuse Market, Abuja, in a bid to create more awareness.

Upon their arrival at the market, however, the “resume or resign” protesters were confronted and attacked by some people who are opposed to their campaign.

It took the intervention of Policemen to disperse the crowd.

We just went to Wuse market for mobilization against 100 days event tomorrow & a regular face at Unity Fountain brought thugs to attack us.

This is me live in Wuse market
Wia PMB is having 90% supporters
Why bring protest to market
If not looking for trouble y market pic.twitter.com/Wz8ccIC8fo

From the violent videos I saw from Charly Boy’s Wuse Market protest today, there is cause for panic. October 1 is not a joke

People laughing at Charly boy for taking a protest to Wuse Market.

Nigerians are the reason why Nigeria is backward.

😂😂😂 he went to Wuse market did he think it was Alaba International https://t.co/a9esadc9uk

At Wuse Market today, Freedom of Speech plus Freedom of Movement were defeated by the Freedom of Expression!!!

Yeah! The Hausa traders in the Wuse mkt were resisting the #ResumeOrResign protesters with all manner of weapons of stones and sticks…

Yeah! The Hausa traders in the Wuse mkt were resisting the #ResumeOrResign protesters with all manner of weapons of stones and sticks…

Unfortunately, d millions of youths affected by ASUU strike are also waiting for 66-yr old grandpa Charly Boy to help them protest, in 2017

Charly boy should not die for this country. Please I beg him. Don’t waste your blood.

Sowore: Never In Nigerian Democracy Has A Judge Been Treated With Such Disdain – Atiku