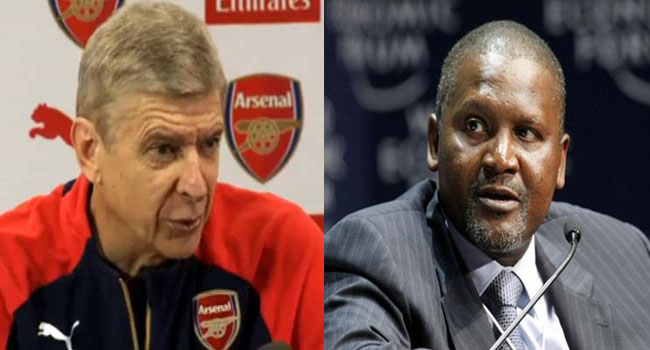 Africa’s richest man Aliko Dangote says the first move he will make if he succeeds in buying Arsenal is to fire Coach Arsene Wenger.

The Nigerian billionaire said in an interview with Bloomberg that he has coveted the English Premier League club since he became a supporter in the mid-1980s.

“The first thing I would change is the coach; he has done a good job but someone else should also try his luck,” Dangote said.

He extended his stay at the Emirates by another two years in May to end months of speculation over his future at the club. after they failed to qualify for the UEFA Champions League for the first time in 20 years.

The Gunners have failed to qualify for the UEFA Champions League for the first time in 20 years.

Earlier in 2017, Usmanov sought to buy out Kroenke in an offer that valued Arsenal at £2 billion ($2.6 billion).

Dangote, however, reiterated his determination to buy the North London club when he completes the construction of the $11 billion oil refinery in Lagos, Nigeria’s commercial capital.

He noted that Kroneke and Usmanov can be persuaded if they get someone to offer them a “walk away” price for the club.

“If they get the right offer, I’m sure they would walk away. Someone will give them an offer that will make them seriously consider walking away.

“And when we finish the refinery, I think we will be in a position to do that. It’s a great team, well-run. It could be run better, so I will be there,” he said.

He Scored The ‘Most Spectacular Goal In German Football,’ Klopp Hails Okocha