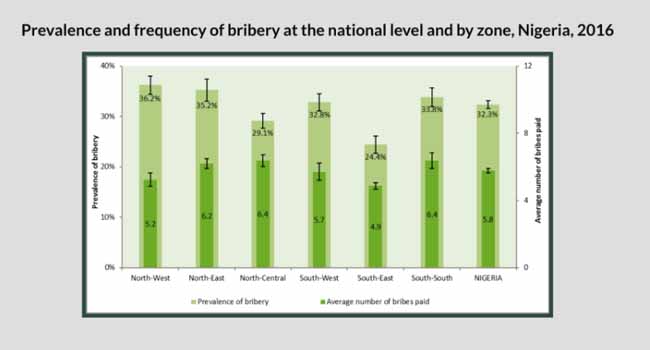 The National Corruption Survey published by the National Bureau of Statistics has shown that Nigerians have spent about N400 billion on payment for bribe between June 2015 and June 2016.

According to the report, almost one bribe is paid by every adult Nigerian per year by combining the total number of people who paid a bribe to a public official.

“The magnitude of public sector bribery in Nigeria becomes even more palpable when factoring in the frequency of those payments, as the majority of those who paid a bribe to a public official did so more than once over the course of the year.”

Furthermore, it was disclosed that bribe-payers in Nigeria pay an average of some six bribes in one year, or roughly one bribe every two months.

“On average, almost one bribe is paid by every adult Nigerian per year by combining the total number of people who paid a bribe to a public official with the frequency of those payments, it is estimated that a total of roughly 82.3 million bribes were paid in Nigeria in the 12 months prior to the survey.

“This results in an average of 0.93 bribes paid per adult, or almost one bribe paid by every adult Nigerian per year.

“Roughly 400 billion Nigerian Naira spent on bribes each year taking into account the fact that nine out of every ten bribes paid to public officials in Nigeria are paid in cash and the size of the payments made, it is estimated that the total amount of bribes paid to public officials in Nigeria in the 12 months prior to the survey was around 400 billion Nigerian Naira (NGN), the equivalent of $4.6 billion in purchasing power parity (PPP).

“This sum is equivalent to 39 per cent of the combined federal and state education budgets in 2016,” the report stated.

The survey also showed that the private sector has a major role to play in Nigeria’s level of corruption.

According to the report, while private schools are ranked 5.9 per cent, the wide spread presence of bribery is 3.7 per cent among doctors in a private hospital.

The survey ranks nurses as responsible for 3.3 per cent of bribery in the private sector while 1.9 per cent of bank officials take bribe with a prevalence rate of 2.1 per cent.

Furthermore, it indicated that the prevalence of bribery in the insurance sector is the highest by 6 per cent.

It also stated that Police officers are among the three types of public officials to whom bribes are paid most frequently.

“The average bribe paid to Police officers is somewhat below the average bribe size. Although fewer people come into contact with judiciary officials than with police officers over the course of the year, when they do, the risk of bribery is considerable: at 33 per cent, the prevalence of bribery in relation to prosecutors is the second highest, closely followed by judges and magistrates.

“While money is by far the most important form of bribe payment in Nigeria, the survey shows that other forms of bribe payment, such as the provision of food and drink, the handing over of valuables or the exchange of another service or favour, also exist.

“Qualitative research shows that such exchanges may sometimes include sexual services, although the actual extent of that particular form of bribe payment is unknown,” the report added.