Jane Fonda, Robert Redford Turn Up The Heat In Venice 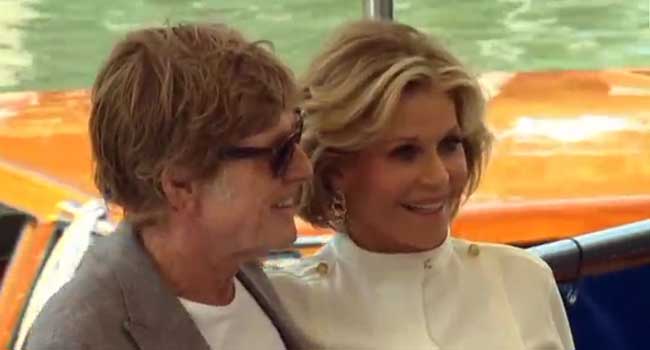 Jane Fonda wished the sex scene in her new movie with Robert Redford had lasted longer, the 79-year-old American actress said as their latest collaboration on screen “Our Souls at Night” premiered at the Venice film festival on Friday (September 01).

“I live for sex scenes with him,” Fonda told journalists in Venice. “He’s a great kisser so it was fun to kiss him in my 20s and to kiss him again in my almost 80s.”

Forty-seven years after their collaboration on the set of “Barefoot in the Park”, Fonda and Redford reunite in a Netflix production directed by Indian filmmaker Ritesh Batra about getting another chance at love when one gets older.

Redford, also the movie’s producer, said he wanted to make it because today’s film industry was increasingly geared towards younger viewers and “there were very few opportunities for films to be made that would satisfy the older audience”.

Both 81-year-old Redford and Fonda were honoured with the Golden Lion for Lifetime Achievement at the festival on Friday.

The movie, which screened out-of-competition at the festival, tells the story of Addie Moore and Louis Waters, two retired and widowed neighbours living in a small town in the U.S. state of Colorado.

They have known each other most of their lives but rarely spoken. That changes when Addie knocks on Louis’ door one night and without much ado, asks: “Would you be interested in coming to my house sometime to sleep with me?”

Both start sharing their long-silenced regrets about life-changing events in their married lives – Louis’ extramarital affair and Addie’s loss of a daughter – and the resulting difficult relationship with their adult children.

“For me the movie is about hope,” Fonda said about the adaptation of a Kent Haruf novel.

While Redford lamented the fact that when you get older “you have to give up certain things” which he found hard to deal with, Fonda said at least on a love and sexual level getting older was a good thing.

“It gets better because we’re braver, what the heck do we have to lose? So my skin sags, so does his. You know your body better so you’re not afraid to ask for what you need,” she said.

‘I Got In A Lot Of Trouble, I Had To Leave Nigeria’ – Davido

Bollywood Mourns Another Star As Rishi Kapoor Dies At 67