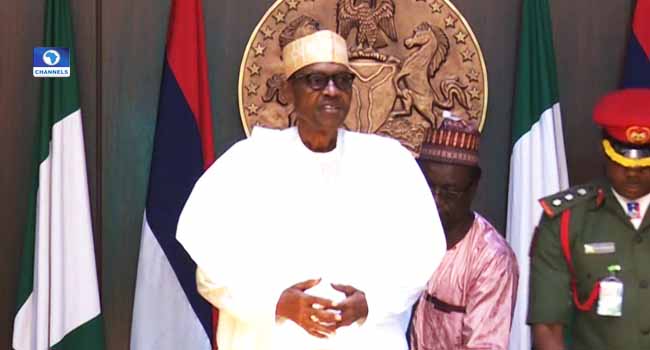 President Muhammadu Buhari has expressed sadness over the attack on a community in, Plateau, saying it is unacceptable for anyone or group to take laws into their hands regardless of the situation.

He noted that communities in Plateau have over time, worked towards peace-building and the recent attack is only a drawback which the government as well as security agencies will fight against.

The President who made this known on Saturday, stated that law enforcement agencies are already working to apprehend the perpetrators of the attack that led to the death of 20 persons.

“I am saddened by the senseless killings that have taken place in Ancha village in Bassa Local Government, Plateau State.

“It is unlawful and unacceptable for anyone or group to take the law into their hands in the name of revenge or reprisals.

“Plateau’s communities have achieved a lot in terms of mediation and peacebuilding. We will not allow a return to the dark days of anarchy.

“We have a mandate and the determination to protect the lives and property of all citizens of Nigeria, wherever they reside.

“Our law enforcement agencies are already working to apprehend the perpetrators of the Plateau killings and whoever their sponsors may be.

“May the Almighty God grant peace to the souls of the victims and comfort to the grieving families and community,” he stated.

According to eyewitnesses, the attack which occurred on Friday may have been a reprisal, allegedly carried out by suspected herdsmen, following an earlier dispute between themselves and the villagers.

Apart from the 20 who were killed, many others were said to have sustained gunshot wounds, as well as deep cuts from machetes and among the victims were six children