Officials of the Nigeria Customs Service have discovered 1,100 pump-action rifles in a container at the Tin-Can Island Port in Lagos.

The weapons are believed to have been smuggled into the country by a gun-running syndicate.

Controller-General of Customs, Colonel Hameed Alli (retd), told journalists at a briefing in Lagos on Monday that the weapons were brought in from Turkey and concealed in a container purportedly conveying wash basins.

Following a thorough examination of the said container on September 7, the Customs boss said the weapons included 600 pieces of Georgia Magnum Black Pump-Action rifles among other rifles.

Alli also said a Customs officer and a clerk at the Tin-Can Island Command have been arrested as part of investigations.

The Customs boss had on January 30 told reporters in Ikeja that despite the Federal Government’s ban on such type of weapons, the rifles were found in 49 boxes.

He said the weapons were concealed in steel doors and other merchandise goods in a 40-feet container conveyed in a Mack truck. 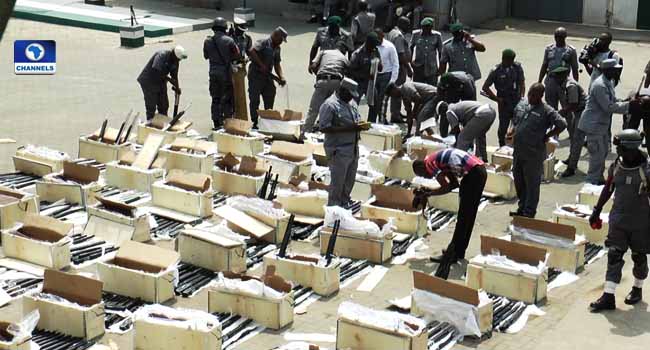