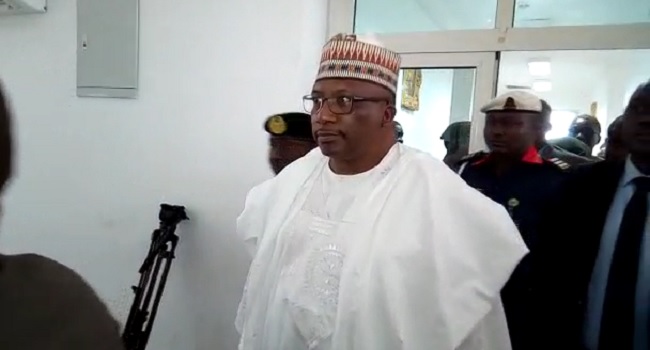 A few hours after announcing an indefinite curfew in Jos the Plateau State capital, the governor Simon Lalong has met with the leaders of the Hausa and Igbo communities to further allay any fears of the breakdown of law and order in the state.

The Minister of Interior, General Abdulrahman Dambazau is also in attendance at the meeting.

The Plateau State Government on Thursday placed the state capital, Jos under an indefinite dusk-to-dawn curfew, due to tension between members of the Hausa and Igbo communities in the city.

This follows as tension built up in the city after rumours made the rounds that members of the Hausa community were set to the attack Igbos in retaliation to reported attacks on a Hausa community in Rivers.

As a result, there was confusion around the city centre with traders hurriedly closing their shops and residents rushing back home.

In a statement by the Director of Press and Public Affairs, Mr Emmanuel Nanle Samuel, the sudden buildup of tension” in Jos to “the conduct of some disgruntled elements, who have decided to throw the metropolis into confusion on account of their negative reaction to the agitations of Independent People of Biafra (IPOB) in the South East”.

“Consequently, the governor has directed an immediate imposition of curfew from dusk to dawn (6pm – 6am) within the Greater Jos-Bukuru Metropolis, until further notice,” the statement read in part.

“The deployment of security personnel to all flash points within the metropolis has also been directed to ensure compliance with the curfew order and to avert any further breach of law and order.”

The governor assured all citizens of their safety and asked them to go about their activities without fear.