FG To Start Trial Of Boko Haram Suspects Next Month

The Federal Government will begin the trial of Boko Haram suspects detained in military camps from next month and the cases will be speedily handled, the Federal Ministry of Justice said on Sunday.

“All is now set to begin the arraignment of suspected Boko Haram suspects in various detention facilities in the country,” a statement said, adding that this would start on October 9.

Justice Minister Abubakar Malami has assigned government prosecutors while defence counsels would be provided by the Legal Aid Council, it said.

The ministry said 1,600 detainees will be tried early next month, adding that judges who would “expeditiously” handle the cases had been chosen.

Despite claims by the Nigerian security forces that thousands of Boko Haram suspects have been arrested and were in custody, diligent prosecutions and convictions have been rare.

The most high-profile case currently in court is that of Khalid al-Barnawi, a leader of the moribund Boko Haram offshoot, Ansaru, on charges of abducting and murdering a number of foreign workers.

Nigeria’s military and government maintain Boko Haram has become a spent force after more than two years of sustained counter-insurgency operations, including with neighbouring Cameroon, Chad and Niger.

Boko Haram which seeks to impose a strict Islamic legal system in Nigeria’s mainly-Muslim north has killed at least 20,000 people and forced some 2.6 million others to flee their homes since 2009, sparking a dire humanitarian crisis in the region. 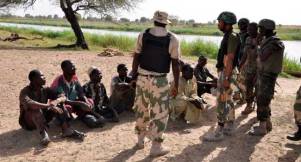