I Will Defeat President Buhari In Free And Fair Election – Fayose 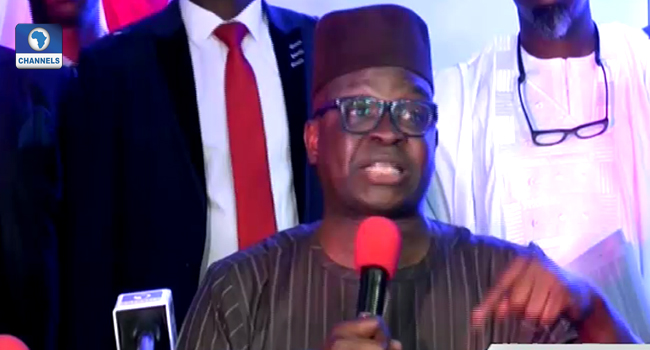 It is still a full year and five months to the 2019 elections, but some politicians eyeing the highest office in the land are already positioning themselves to run.

One of such is the Ekiti State Governor, Ayodele Fayose who has not hidden his desire to contest the presidency, on the platform of the Peoples Democratic Party.

Governor Fayose in his declaration said that he is the Nigerian man to watch out for as the nation moves into another decade.

He referred to the coming back of President Muhammadu Buhari as a sign of him attaining the seat of the President.

“Nobody like me can take out the President from his office, twice I defeated the incumbents to become governor of Ekiti State.

“I am confident with your support as my party leaders and supporters, I will defeat the incumbent President, Muhammadu Buhari in a free and fair election”.

He further noted that if elected he will ensure workers salaries are paid, exchange rate fixed at a normal rate, reduce the rate of kidnapping by herdsmen, security, the unity of the country, ensuring schools are in international standard and stop molestation of judges.

In his words, “I am the man already destined by God to take Nigeria out of its present political and economic stagnation”.

Fayose had earlier said in a Press statement by his Special Assistant on Public Communications and New Media, M. Lere Olayinka expressed optimism of winning the coming presidential election when Nigerians elect a new president in 2019.

“I have a penchant for taking powers; that one in President Muhammadu Buhari’s hand, I will take it.”

He, however, said in a letter addressed to leaders of the PDP that his ambition to be president was without prejudice to the party’s position, but in the overall interest of the party and the country.

The letter read; “It is with a deep sense of responsibility that I write to inform you of my intention to seek the ticket/mandate of our party to contest the 2019 presidential election.

“Considering your support and commitment towards our great party, Peoples Democratic Party (PDP), it becomes imperative to keep you informed and seek your support.

“This ambition, however, is without prejudice to our party’s position but in the overall interest of the party and our country.

“I urge that all hands should be on deck to ensure victory at the 2019 presidential election.

“Accept the assurances of my highest regards as a determined presidential hopeful.”