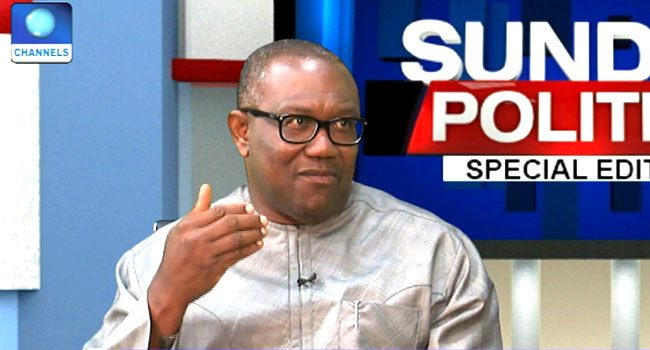 Former governor of Anambra State, Peter Obi, has attributed the problems of Nigeria to the failure of its leadership over the years.

Obi, who was a guest on Channels Television’s political programme, however, said both the leaders and the citizens should be blamed for the nation’s challenges.

“What we are suffering is a cumulative effect of leadership failure,” he said during his appearance on a special edition of Sunday Politics.

“The leaders are uncaring, the Nigerian followers have also abandoned the good governance of their country to this clique of uncaring people, and maybe our involvement in Christianity and religion now has even worsened and weakened our energy to confront this oppressive and weak leadership.”

The former governor also denied having said that President Muhammadu Buhari’s administration has failed but said the people failed as a nation.

He said, “I didn’t say this government has failed, I was categorical. I said if you look at it – we are celebrating 57 years of independence and if you actually reflect properly – we have failed as a country, including myself.”

“As a country, we need to come up with the truth. What makes a difference in a human being is the ability to accept when you are not doing well; we have failed as a country,” he reiterated.

On how to have prevented the country from going into an economic recession, Obi said, “If we have a reserve today of $100bn, we won’t be in recession.”

“Let me even go to the 80s, can you compare us with countries that we were a par in terms of development? From 2000 – 2015 was Millennium Development Goals (MDGs), did we achieve any? he questioned.

“Between 1980 and today, Nigeria has actually become poorer as a country when compared to other nations.

“So, I was here and I did mention to you that in 1980, one of the most critical issues affecting our economy today is the issue of our low reserve,” said Obi.