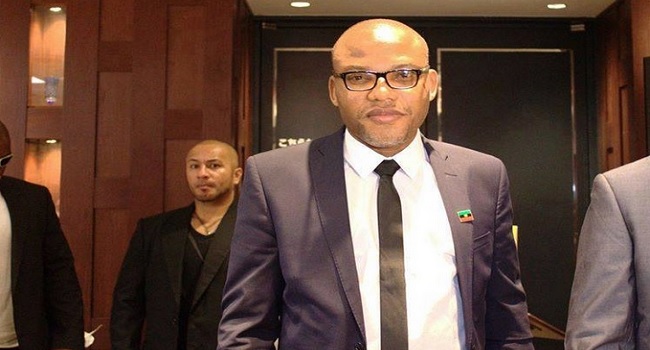 The ECOWAS County Court Judgment (CCJ) has adjourned the case involving the leader of Indigenous People of Biafra (IPOB), Nnamdi Kanu and the Federal Government.

The case was heard on Tuesday, October 10, morning which saw the absence of Kanu but his lawyers applied for a motion on notice to file additional documents which include a report by Amnesty International on June 10, 2016, and titled “Killing of Unnamed Pro Biafra Supporters by Military.”

The counsel said it must be urgently investigated presenting photographs of slain members of IPOB allegedly killed by Nigerian security personnel.

The Federal Government’s lawyers denied receiving this motion but the court saw evidence that it had been served and objected to the adoption of the documents.

The court asked Kanu’s lawyers to proceed with their arguments but the government’s lawyers objected that their lead counsel was at the supreme court and requested the case be adjourned till the afternoon.

At the resumption of the case on Tuesday afternoon, counsel for the Federal Government told the court that their lead counsel would not be able to attend as he has an urgent meeting with the Vice President and asked for a short adjournment. They also requested a copy of the ruling from the last hearing.

Kanu’s lawyer, however, objected to an adjournment and argued there was no reason for the case not to proceed.

He said that the government was stalling the case and asked that any adjournment be with terms and requested N2 million naira. He also stated that he did not believe the lead counsel was delayed at the Supreme Court earlier

The court adjourned the case till November 21, stating it would be the last adjournment in the case and they will also give their decision on the application for N2million on November 21, 2017.

It will be recalled that Nnamdi Kanu on March 2016 dragged the Federal Government of Nigeria to the ECOWAS Court, demanding $800,000 as compensation.

Ekweramadu Returns To Nigeria After Assault In Germany