IPOB’s Intention Is To Cause Chaos In Nigeria – Defence Minister 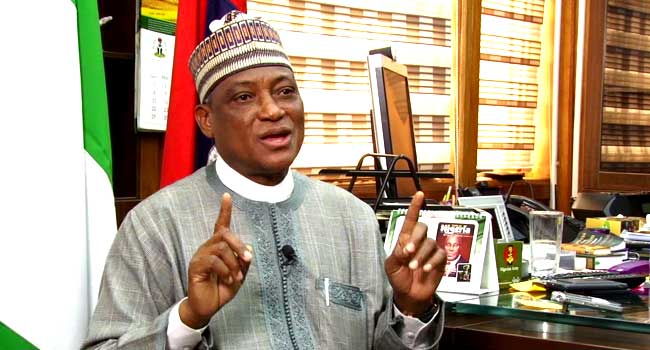 In this interview on Channels Television’s Question Time, the Minister of Defence, Brig. Gen. Mansur Dan-Ali (rtd), speaks about the proscription of the Indigenous People of Biafra (IPOB) as a terrorist organization.

The minister also spoke about the security of the country among other issues, including the activities of the Nigerian military in the South East.

Q Military operations in the country

We have so many operations across the country, not in the South East alone. We have Operation Lafiya Dole in North East, we have operation Sharan Daji in the North West, and we have Delta Safe in South-South, with other operations that are across the six geo-political zones. We have the Messa which is national, and Awatse in South West. It is an ongoing exercise that trains the armed forces.

Q A lot of these exercises, Operation Python Dance for instance, have to do with the perception of the people. It is being alleged that the military acted out of military mandate and that this (the issues in the South East) was at best a civil unrest and the police could have been sent to repel it.

No, that is not true. That is not the true situation. There are many other areas that we had exercises, why that one, IPOB? IPOB had intention. They saw military coming to do their normal constitutional job, and then they interrupted.

Q You said IPOB has a clear intention. What is the intention of IPOB?

They have the Intention of disorganising and bringing chaos in the country.

Q With all these allegations, is there any intelligence analysis and fact that IPOB is really a threat to peace and security of the nation?

The Defence Headquarters of the Armed Forces did their analysis and there are so many factors that indicated that this IPOB group is not a peace-loving group because they have gone far beyond what is expected of a peaceful group. Why I say so? There are so many things they came up with. They mentioned that they are forming national guards; they have formed intelligence and what you call security forces. They have even gone beyond that to come up on social media to say that if their agitation is not meant, they are going to bring down tools across the country. So does any group that has peaceful intentions go to that extent?

Q The proscription of IPOB has elicited a lot of reactions from different quarters. Many people are wondering under what legal platform is IPOB proscribed

Well, you know it was the Ministry of Justice. They have gone to court and they have confirmed that the proscription is allowed. Before then, the Armed Forces had done their analysis and part of the analysis I mentioned national guard, security and intelligence groups. They have gone beyond that. They were even attacking the Armed Forces during their exercise with fuel bomb, threatening them. So how can such a group be allowed to be doing such things? Any reasonable government will not allow such things to happen. The country’s unity is paramount and any group or society that wants to bring law and order down will not be allowed to do so constitutionally.

Q The international community is saying that IPOB isn’t a terrorist organisation. So does this contradict the Defence Ministry’s position?

Here, we have so many indices that we used in labelling them as a terrorist group. One of them, like I said, any group that goes beyond peaceful and constitutional means of getting things is a problem. Secondly, this is a group – I will now talk to you as a Nigerian, not even a Defence Minister – that wants to bring chaos, confusion into the nation. Will you allow that or will you go with that group?

Q There are international norms and conventions for the process of labelling an organisation a terrorist group. Has the Federal Government followed all these norms?

What due process do you need to bring down a group that wants to bring chaos into a nation? I will give you an example. There is a video that is circulating that the Hausa man is being beaten by the South-Easterners. They wanted a repercussion and that is the same issue to be repeated in the North. These are some of the issues that people (don’t understand). There are so many intelligence reports of what they are doing. Even if you carry arms, or try to move arms from the security forces, is it one of the problems, I mean (conditions), for a group to be labelled? What of hate speeches? There are so many hate speeches all over the place to bring confusion in the country. Also, threatening the Armed Forces with fuel bomb is also part of it. So, constitutionally, they should have due process in whatever agitation they have. But they didn’t do it; they decided to go by force. They even mentioned, to some extent, they go to the public and say that if their demands are not met, they will bring the country to a standstill. Is that what should be allowed?

Q The UN guarantees the right to self-determination. So squashing IPOB now, do you think this is a violation of international norms?

I told you exercises are parts and parcel of military training and they do it in each of the geo-graphical zones. Why didn’t it happen in North-East, I mean North-Central? Why didn’t it happen in the South-West? Why didn’t it happen in the North-West where they have other exercises like that? You know, in a country where you have the Armed Forces, you need to train in each part of the country so that the troops will be familiar with the ground. And that is what is happening. They didn’t go there to fight IPOB but in the essence of the exercises, they went beyond what is expected of them. They (IPOB members) blocked them (military) through road block. They were pelting them with all sorts of issues. They even tried to remove arms from some of the soldiers there.

Where did you see it? Was it not because they blocked the road? The military is going for an exercise with heavy armoured tanks, you blocked them. Then you are inviting problem. I believe the exercise has nothing to do with the IPOB issue. The IPOB should have followed the constitution and provisions to go for their yearnings or for what they are looking for. But they didn’t do that. Instead, they are blocking the military. Like I said, there is no geographical zone that these exercises are not being held. And it is being done termly, last year it was there. Was it done because of IPOB? This is number two (Python Dance 2), they did one last year, same period. Was it done because of them, why now?

Q Most of the Federal Government’s reaction is fuelled from the perceived hate speeches now. Does hate speech confers the status of a terrorist organisation on a group?

No. But there are others that will make it from the hate speech to become a terrorist group. It is just one index, I have mentioned others. Destruction of lives and properties, obstruction of peaceful activities in the society and so many others – carrying arms or producing arms like the time bomb they are producing and there are others. In fact, their own hate speech is beyond because we have evidence that shows that these people do a lot of things such as having a lot of security groups, national guards, producing their own arms and importation of arms. Not quite long, Kanu was seen with one of the Ambassadors from Turkey.

Q You are saying that IPOB got Turkish backing. The Turkish government have said that wasn’t the Ambassador…

Well, as far as I am concerned, the Foreign Affairs have done their own bit. They have covered that angle. So whether he is not, it is part and parcel of some of the indices that it was discovered that the arms were coming from there and he was seen with so many people, not only him.