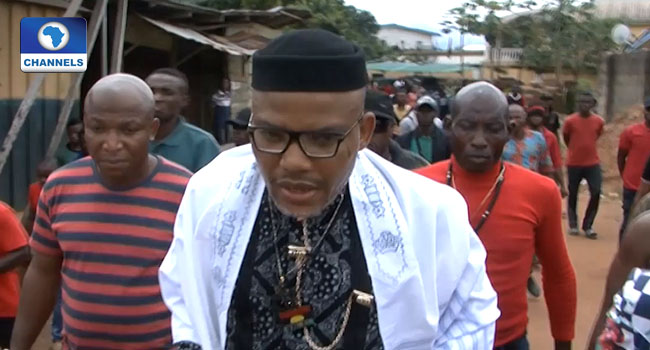 The Commissioner of Police in Abia State, Mr Anthony Ogbizi, has said that weapons, including petrol bombs and one double-barrel gun, were recovered during the raid carried out on the residence of the leader of the Indigenous People of Biafra (IPOB), Nnamdi Kanu.

Speaking on Thursday during an interactive session held at the officer’s mess in Umuahia, Ogbizi said that the raid was carried out based on an intelligence report and joint effort with the military and they will not hesitate to revisit the home of IPOB leader if there is a new evidence.

“We have an intelligence report that an uncompleted building is being used for training Biafra secret service and we have confirmed it, so my question is, are we not supposed to go there to verify the evidence?

“We recovered many of Biafra’s insignia, the staff of office and some of those items are being analysed,” Ogbizi said.

He said that the petrol bombs were found in buckets and incriminating documents and letters, concerning IPOB’s activities and plans, were also recovered during the raid on Nnamdi Kanu’s house.

Ogbizi also disclosed that a member of the IPOB involved in burning down vehicle and committing homicide has been arrested. He called on parents to keep watch on their children so they will not be misinformed to become hoodlums.

“As I am talking with you, one of the IPOB members who burned down a vehicle and killed somebody has been arrested.

“They should not be allowed to continue and get all the uninformed youths and put them in front to cause mayhem.”

Ogbizi charged the youths to seek other ways to channel their grievances which do not involve violence because the police would not relent in their duty to apprehend defaulters in its bid to maintain peace.

He, however, did not parade the weapons and items recovered but said, “We are analysing the documents and the items we recovered with a view to determining the next line of action.”