Election Victory ‘Revalidates’ Will Of The People, Says Kenyatta 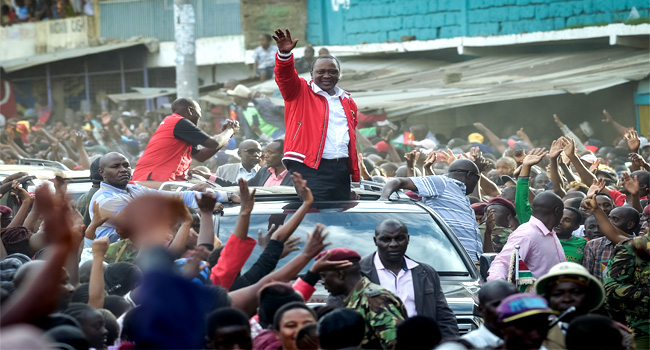 President Uhuru Kenyatta on Monday said his victory in Kenya’s boycott-hit election re-run was a “revalidation” of the people’s will after a vote he won in August that was overturned by the courts.

“This was nothing more than a revalidation of their general will, a statement of their national intent in support of myself and of the Jubilee government.”

Kenyatta also said his August win, in which he took 54 percent of the vote, had never been called into question.

“When my victory was put to the test in the Supreme Court, this was the verdict: the court did not challenge my overwhelming mandate of 54 percent. The numbers were never questioned,” he said.

What the court had queried, Kenyatta argued, was the manner in which the results were transmitted.

“What the court questioned was the process of declaring my victory. Because the court did not question my victory, they, by extension, with their ruling, validated my 54 percent numbers.”

But Thursday’s vote was fraught with problems. Polling was prevented by violent demonstrations in four western counties where Odinga supporters had widely observed a boycott.

And with turnout among Kenya’s 19.6 million registered voters standing at just 38.8 percent, there are likely to be questions over the credibility of the election, analysts say.

Kenyatta himself admitted there would likely be fresh legal challenges to Thursday’s result.

“My victory today is just part of a process that is likely to once again be subjected to a constitutional test through our courts,” he said.

“We shall wait for that process and that process’s outcome,” he said. “Nobody shall deny them their consitutional right.”

Somalia Comes Out On Top In Kenya Sea Border Judgment