Real Will Get Back On Track In First Wembley Visit – Zidane 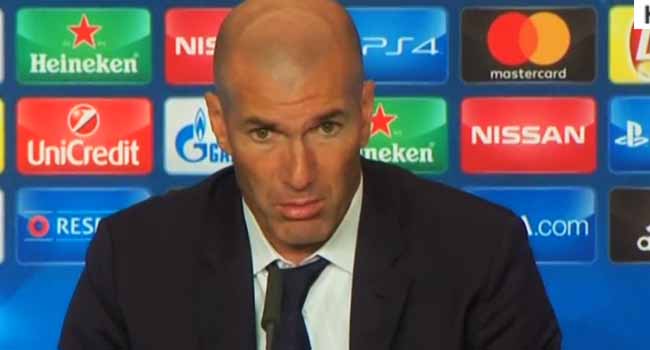 Zinedine Zidane insists Real Madrid will shake off their recent struggles and deliver a performance worthy of their first ever appearance at Wembley when they face Tottenham in the Champions League on Wednesday.

Zidane’s side have endured stinging criticism after their spluttering start to the season hit a new low with a shock 2-1 defeat at La Liga minnows Girona on Sunday.

Real trail eight points behind leaders Barcelona after losing two and drawing two of their opening 10 games and Zidane has faced pointed questions about his tactics and motivational abilities for the first time.

Against that troubled backdrop, a trip to London to face Tottenham at their temporary Wembley home could provide a tricky test of Madrid’s morale.

But Zidane sees it differently and the Madrid manager believes his club’s first appearance at one of the world’s most famous arenas can have an uplifting effect on his team.

“Wembley is an important place in the football world. It’s a great stage to play on against great opposition,” Zidane told reporters at Wembley on Tuesday.

“It’s not been without its complications in the build-up, but we are very much prepared to do our job.

“For me I played in the old stadium and it was a fantastic experience.

“Unfortunately I won’t be able to play tomorrow, but it’s a beautiful stadium and it will be a great spectacle.”

The opportunity to break new ground at Wembley is a welcome distraction for Zidane and his squad given their erratic form.

Crowned European champions for a 12th time last season, Madrid have been unusually error-prone this term.

A 1-1 draw at home to Tottenham earlier this month was the latest unconvincing display from Zidane’s team.

But Zidane denied spirits are low in the Real camp and he is confident they will use the criticism as motivation to silence the doubters.

“Perhaps some people might think that after a defeat we are down in the dumps but that’s not the case,” he said.

“We all know how football works, sometimes you are going to lose matches and it’s obviously frustrating.

“The important thing is we don’t dwell on that. Nothing will change in our approach, we are going out to win.

“After a defeat people aren’t happy but in some ways, I like this. I like that we have a big game coming up.

“I feel I work my best in these situations.”

Although Real are stuck in a rut, they remain level on points with Tottenham at the top of Group H and can qualify for the last 16 with two games to spare if they beat the Premier League side, who have their own problems after successive losses to Manchester United and West Ham.

Asked to explain his side’s problems, Madrid defender Marcelo claimed a lack of motivation for the more mundane La Liga fixtures might be to blame.

“Perhaps it falls to the motivation of each player, it’s normal that for the Champions League we have very high motivation,” he said.

“To win La Liga you have to perform well all year. It’s very difficult to play a match every three days and keep that level.

“Obviously when you lose it’s never good, the whole dressing room is going through a bad moment in that sense, but in fact, we can use that as motivation to bounce back and end the little stumbling run we’ve had.

“We have to take the criticism at Real Madrid. There is always pressure, but despite that we’re not going to lose our heads.

“We’re going to be cool and calm and work hard to put things right.”

F1: Alonso To Replace Vettel At Aston Martin In 2023

Benzema, Asensio On Target As Real Madrid Down Juventus In Friendly

Mbappe Wanted To Know If I Would Join PSG, Says Tchouameni