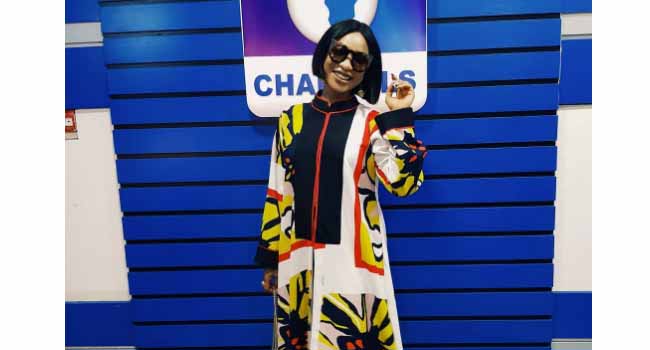 Nollywood Actress, Tonto Dikeh, has said she will no longer divulge information about her private life as she has realized it neither helps her career nor changes people’s perception about her.

She said this while speaking on Channels Television’s Rubbin’ Minds, in reaction to the backlash that followed her breakup and domestic violence dispute with her estranged husband, Churchill Olakunle.

The actress, however, noted that she has no regrets over the fact that she had shared her story earlier as it created awareness and helped other people in similar situations.

According to her, rather than speak about the past, she has now resolved to focus only on the positive side of life with a stronger will to succeed.

“Yes, I’ve decided to just keep quiet. Apart from being exhausted I think they have a plan to just keep taking me backwards but I realize it now that my responses don’t even help me or my brand, it doesn’t even change the perspective people have of me, so why even bother,” she asserted.

“I do not regret my interviews because I got to know that after the interviews a lot of domestic violence victims came out and a lot of people started getting saved and despite all the shame and criticism the interviews brought me, I won’t still regret it because I know that I truly helped someone out there.

“It was killing me, but I got to the point where I understood that, nobody cares about me or the situation that happened in my home asides from me.

“I’m not about to validate my past pain to anybody, I’m just all about moving forward and dumping every weight that has held me backward for a very long time and just being as successful as I can; so whether you believe me or not, it does not matter.”

Speaking further about the situation of things between she and her estranged husband, the actress said she has already begun the process of pressing charges against him, for reasons she equally chose to keep private.

“I do not intend to keep making a caricature of my private life, so everything that happens in court stays in court – I’m done with the public,” she said.

Speaking about her career, asides working on a new project which she says fans would definitely love, Tonto also noted that she is now more cautious about the kind of roles she would be playing.

“I am on a very exciting project, it’s not a movie but I can’t tell you what it is yet.

“I have started doing movies again, but I am very very guarded on what kind of scripts I choose. I’m not saying I’m big on the movies now, but I’m just waiting for that exceptional script.”

Speaking of other developments regarding her NGO – the Tonto Dikeh Foundation, the actress said she is currently building a school for the less privileged and with the help of the media, there would be more publicity for upcoming projects and activities.

“It is a free school, and my foundation is about giving back educationally, girl child empowerment, women empowerment and youth empowerment.

“So, no, we are not here for a short time. We’ve done 10 years and we are about to go more, we’re just getting stronger by the day that’s why you are seeing more works from us,” she added.

Deputy Governorship: I Have Never Failed With Leadership – Tonto Dikeh