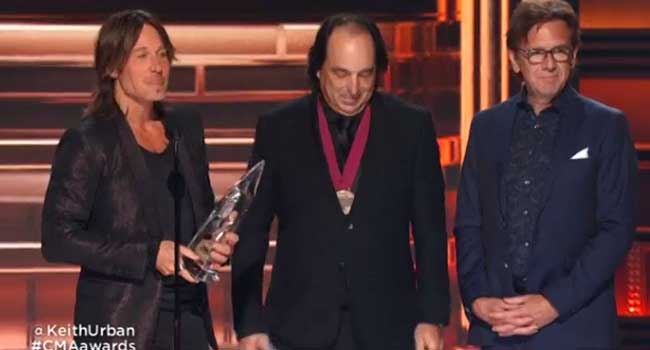 The 2017 Country Music Association Awards (CMA’s) on Wednesday blended somber reflections on recent tragic events including the Las Vegas mass shooting with performances by top music stars and even a dose of political humor.

Eric Church opened the live three-hour broadcast from Nashville, Tennessee which aired on ABC with a rendition of the hymn “Amazing Grace.”

Veteran hosts Brad Paisley and Carrie Underwood then took the reins, with Underwood declaring “This has been a year marked by tragedy impacting countless lives, including so many in our country music family.”

“Tonight,” she proclaimed, “we’re going to do what families do, come together, pray together, cry together and sing together, too.”

The hosts then dedicated the 51st CMA Awards “to all those we’ve lost, and to all of those who are still healing. We love you, and we will never forget you,” Paisley said.

Two hours into the show a screen with the pictures and names of the 58 people killed by a gunman in Las Vegas at a country music festival on October 1 filled the stage.

Earlier the hosts lightened things up with banter about CMA’s edicts on avoiding controversial subjects, before launching into jokes about President Donald Trump for his cable news-watching and Twitter habits in a song parody take-off on Underwood’s hit “Before He Cheats,” replacing it with “Before He Tweets”.

“It’s fun to watch it that’s for sure, ’til little Rocket Man starts a nuclear war. Maybe next time he’ll think before he tweets,” which drew cheers and applause, but fans’ reaction on social media was divided.

Country music legend Garth Brooks was among the big winners, taking home the top award Entertainer of the Year for a second straight year.

Other honorees included single of the year, won by Keith Urban for “Blue Ain’t Your Color,” and Taylor Swift’s “Better Man,” which won song of the year.

Jon Pardi won for new artist, while Stapleton won album of the year for “From a Room: Volume 1.”

Kanu Returns For Trial In Designer Clothes, Despite Court Order