My Season Is Over, Says Nadal 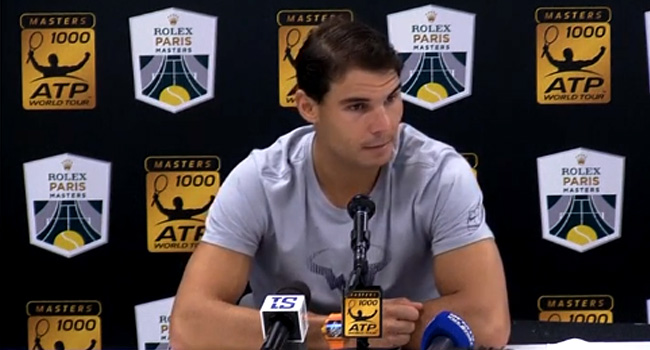 The spirit was as strong as ever but Rafael Nadal’s troublesome knee failed him in the end as the Spaniard quit the ATP Finals after a painful defeat by Belgium’s David Goffin on Monday.

Nadal, at 31 the oldest player to finish a year ranked number one, fought until the last point, saving four match points in a compelling clash, before losing 7-6(5) 6-7(4) 6-4 in two hours and 37 minutes.

“I am off, my season is finished. I had the commitment with the event, with the city, with myself, I tried hard, I did the things that I had to do to be ready to play but I am really not ready to play,” Nadal said.

Nadal could be seen grimacing as the match wore on, especially when he was forced wide or low, but he still managed to scrap his way back from 4-1 down in the decider, despite apparently playing on one leg.

Minutes after defeat, the 16-times grand slam champion told reporters that he was pulling out of the tournament. Nadal’s right knee flared up at the recent Paris Masters.

The Mallorcan, whose career has been plagued by tendonitis, made a stunning comeback from a wrist injury this year when he reached the Australian Open final, then claimed a 10th French Open title after a three-year grand slam drought.

He then went on to win the U.S. Open and reclaim the world’s top ranking for the first time since 2014.

‘I Didn’t Know How I’d Come Back,’ Says Serena