Your Critics Are Not Your Enemies, Fayose Tells Buhari 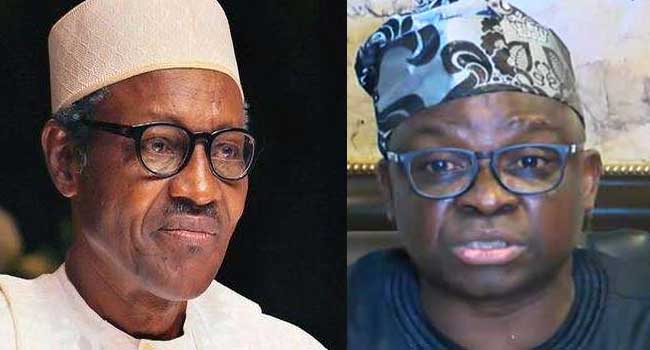 Ekiti State Governor Ayodele Fayose has asked President Muhammadu Buhari not to see him and others criticising his government as his enemies.

The governor, who addressed reporters on Thursday in Ado Ekiti, said such criticism should rather be seen as acts to strengthen democracy in Nigeria.

“I am not Buhari’s enemy, opposition is the strength of democracy; it ensures that the electorates get value for their votes,” he said.

“Those who criticise your government are not your enemies, they are catalysts to your growth as a government.”

On the occasion of his 57th birthday, Governor Fayose said his greatest wish was to wake up on Wednesday (November 15) to receive a congratulatory message from President Buhari.

He said: “The President would have made a difference if he had extended such gesture to others beyond his political party, such a congratulatory message should have been conveyed through his Minister of Information.

“I would have loved to either wake up receiving a congratulatory call from him or read it in the papers – but since it is not coming, it is not a big deal to me and I take no offence on it.”

The governor said one of the reasons he is being loved and cheered by all was because of his love for the ordinary man.

He said he has decided to celebrate his birthday with artisans, motorcycle riders, market women and men among other masses on the streets.

“My birthday will be celebrated with the common man on the streets. All the gifts I have received from family, friends and associates will be distributed to men and women on the streets of my state; this was what I did last year,” he added.

Fayose, who is the Chairman of the Peoples Democratic Party (PDP) Governors’ Forum, also spoke about the reported consensus candidate for the PDP national chairmanship position.

He said: “Nobody can say some zones would hijack it (the post) because there is no election yet; you don’t know where the election would go.

“Twenty-four hours is a long time in an election, what is important is that a credible candidate emerges as PDP chairman and the fact that we must, as members, conclude this convention as one party.

“You also remember that all our candidates have signed and agreed to remain one regardless of the outcome of the convention; that show unity among us. The chairmanship is zoned to the south,” he added.

Also reacting to opinions that his presidential ambition may rob the South of the party’s chairmanship slot, the governor said: ” How can only one man’s ambition rob others their own chance? That is just a cheap blackmail.”