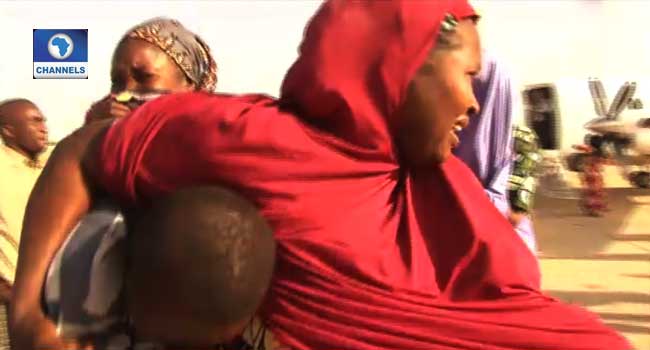 Eight minors displaced by the Boko Haram have been reunited with their families, now resident in displaced peoples’ camps in Borno State, years after being displaced.

The emotional reunion took place in Maiduguri, the Borno State capital on Friday, facilitated by the International Committee of the Red Cross, which is working with the affected population in the region.

As the kids deboarded the plane, their mothers who had waited patiently broke free of officials that were leading them towards the children, hugging them and crying for joy.

Investigations by the ICRC revealed that the kids left home nearly seven years ago and are members of six families from Bama Local Government Area of Borno State.

The LGA is one of the areas captured and held by Boko Haram terrorists at the height of their onslaught in the northeast Nigeria.

By the time Nigerian troops recaptured the area in 2015, hundreds of locals had been killed, maimed, abducted, or forced to flee.

The result is thousands of widowed women and households headed by children who have lost both parents to the violence.

As the insurgency raged, the minors were among those that were forced to flee. The took refuge in the Republic of Cameroun.

“It is the mandate of ICRC to assist families who are affected by armed conflicts, and restoring family links is one way in which ICRC assists people,” said Mr Peter Osodo of the ICRC.

“So, the families who are missing their loved ones come to ICRC or we go to where they are, especially in the camps.”

Fatima Abbas, the mother of two of the minors, said weeks of interviews and discussions with ICRC officials paid off, giving her reason to cheer after years of sorrow caused by the insurgency.

Her husband and the grandparents of the children lost their lives to the insurgency.

“I lost contact with my children seven years ago during the Boko Haram crisis. Their father and grandparents had also been killed. Red Cross helped us find them and I am so happy today,” she said.

Another mother, Amina Abba Tela, had not seen her son for more than five years.

“He was in school when we all dispersed but with the help of Red Cross, who spoke to us and took our pictures from both sides when the information we gave them matched,” Tela said. “I am so happy I could not even sleep last night.”

The Boko Haram insurgency led to the displacement of more than one million persons in northeast Nigeria. According to officials, unaccompanied children found in the host community and most IDP camps in Maiduguri are about 40,000.