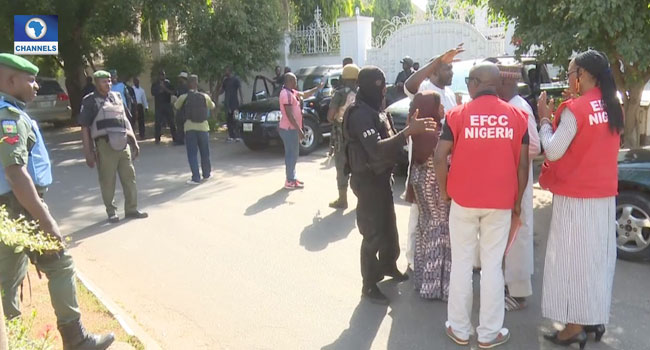 The Economic and Financial Crimes Commission (EFCC) has obtained two separate warrants from a court to arrest a former Director-General of the Department of State Services (DSS), Mr Ita Ekpenyong and that of the National Intelligence Agency (NIA), Mr Ayodele Oke.

The commission confirmed this to Channels Television on Monday, adding that it also got the permission of the court to search the residences of the two former agency chiefs.

Last week, officials of the EFCC had attempted to arrest the NIA and DSS bosses but were prevented by armed officials from their agencies.

It was gathered that the EFCC operatives had arrived at the official residences of the former heads of the agencies located at numbers 21 and 46, Mamman Nasir Street in Asokoro, Abuja to effect the arrest only to meet resistance by the operatives.

Ekpeyong who served as the head of the DSS from 2010 to 2015, had been invited by the EFCC for his alleged role in the arms scam involving a former National Security Adviser, Colonel Sambo Dasuki (retired), and other service chiefs who have since been arraigned.

Oke on the other hand, was recently sacked by President Muhammadu Buhari over the N13 billion found in an Ikoyi, Lagos apartment, said to belong to the NIA.

It was however confirmed Monday that the search and arrest warrants were signed by a Chief Magistrate II in the Federal Capital Territory.

‘You Are Welcome Back’, Buhari Receives Emefiele In Abuja