I Did Not Assent To Maina’s Reinstatement Letter, Malami Insists 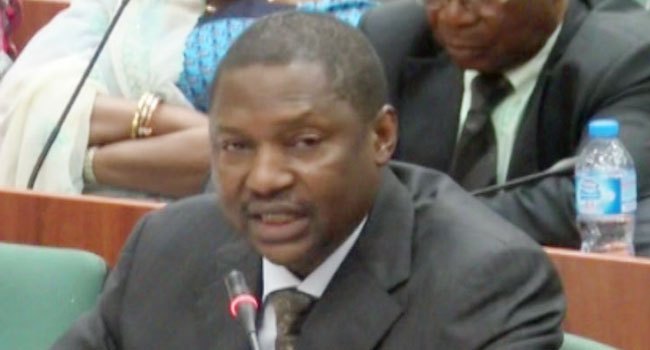 The Attorney General of the Federation and Justice Minister, Mr Abubakar Malami has stood his ground that he did not authorize the controversial letter reinstating the embattled former Chairman, Presidential Taskforce on Pension Reforms, Mr Abdulrasheed Maina.

Malami made his position known on Thursday during a resumed public hearing on Maina by the House of Representatives in Abuja.

The adhoc committee of the lower chamber of the National Assembly is investigating the disappearance, return and reinstatement of Maina.

In achieving this however, the Green chamber quizzed top government officials to explain the various roles they played in the reported saga.

Some of those grilled include the Head of Service of the Federation Winifred Oyo-Ita, Mr Malami, the Permanent Secretary of the Ministry of Interior Abubakar Magaji, and the Comptroller-General of the Nigeria Immigration Service, Mr Mohammed Babandede.

Others invited to explain their roles also include the Minister of Finance Mrs Kemi Adeosun, the acting Chairman of the EFCC Mr Ibrahim Magu, the Director-General of the DSS Mr Lawal Daura, and the acting chairman Federal Civil Service Commission Mr Oluremi Akande.

In his defence, the Minister of Justice absolved himself of the controversy, debunking claims that the purported letter of Maina’s reinstatement into the service came from his office.

“The purported letter dated February 21, 2017 made available by the committee couldn’t have genuinely emanated from the Attorney General,” he said.

“The letter dated October 5, 2017 which was never signed off on that, I arrive at an irresistible conclusion that Maina’s request for the reinstatement was an ongoing process in the Office of the Attorney General as at October 5, 2017.

“It is against the background of the unfinished process relating to the demand or request for the SA to convince the Attorney General as to how the effect of judgement provided by Maina could have a coessential effect on reinstatement which was not developed and presented.”

In the course of the questioning, all the officers denied being responsible for the reinstatement of the former pension boss.

The HOS took time to explain the process for reinstating any official into the civil service.

According to her, any officer who is newly employed or recalled into office usually has to get a nod from the office of the HOS, however, that was not the case with Mr Maina.