PDP Convention: Only One Candidate Withdrew In Anger – Wike 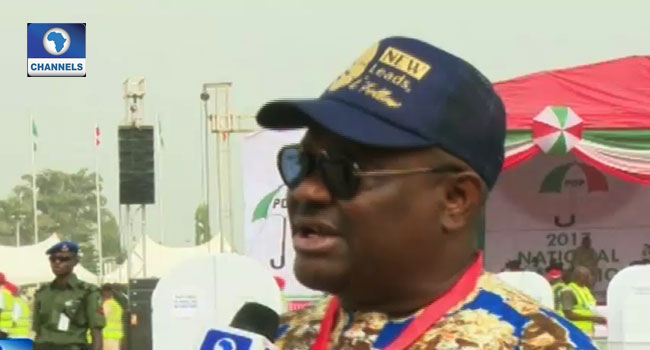 Rivers State Governor, Nyesom Wike has said only one of those who withdrew from the Peoples Democratic Party’s National Chairmanship race did so out of anger.

Wike said this at the Eagles Square in Abuja on Saturday, during the ongoing PDP elective national convention.

The governor said, “In politics when you read the handwriting, you understand that this does not favour you, you find all excuses. I don’t know why they should be offended, they are not offended. Some people withdrew yesterday because you can tell what your chances are.

“Gbenga Daniel has withdrawn, he did not withdraw because he was angry. He said look, he wants a peace process, and he wants everybody to work together. Jimi Agbaje did the same thing.

“So I do not think anybody was offended, except one person that I heard was angry because the position was not micro-zoned.”

The governor explained that the party, having learnt lessons from its defeat in the 2015 general election and the protracted legal battle between the Alli-Modu Sheriff and Ahmed Makarfi factions, which emerged in the party after the defeat, has made them wax stronger.

As of Friday afternoon, there were nine candidates in the PDP’s chairmanship race. However, Chief Bode George withdrew from the race in protest later that day.

Five other candidates followed suit as the convention began, opting to support Professor Tunde Adeniran as the consensus candidate from the South West.

Others are Olusegun Aderemi and Taheed Adedoja.

The move left only three candidates in the race with Raymond Dokpesi (South-South) and Uche Secondus (South-South) taking on Adeniran.

Agbaje said the inability of the South-West PDP to pick a consensus candidate had affected the chances of the region to produce the next chairman.

In announcing his withdrawal, Daniel said he is willing to cooperate with anyone who emerged as the chairman of the party.

In a statement announcing Adeniran as the consensus candidate of the South West, Ladoja explained that the seven aspirants from the zone met on December 6, 7, 8 and 9 with the sole aim of agreeing on one candidate.

“We all agreed that the chances of one person winning are better than those of seven people who are likely to divide the votes coming to the zone,” he said.