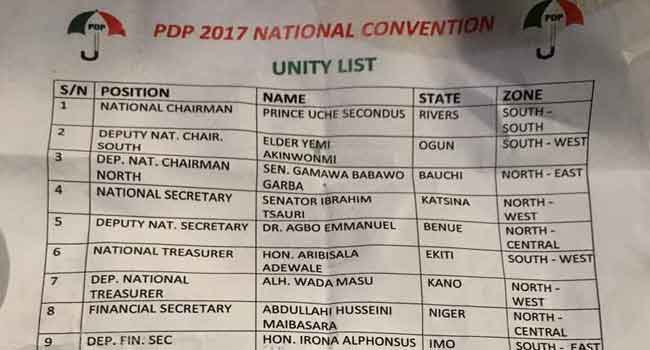 The appearance of a list of candidates entitled ‘Unity list’ has caused outrage at the ongoing elective National Convention of the Peoples Democratic Party in Nigeria’s capital, Abuja.

Allegedly compiled by governors, the list contains the various positions delegates are supposed to elect aspirants to fill. Besides each position is the name of the purported ‘unity’ candidate for the position.

A copy of the list seen by Channels Television shows that for the post of National Chairman, for instance, has the name of Uche Secondus who is from Rivers State in the South-South besides it. 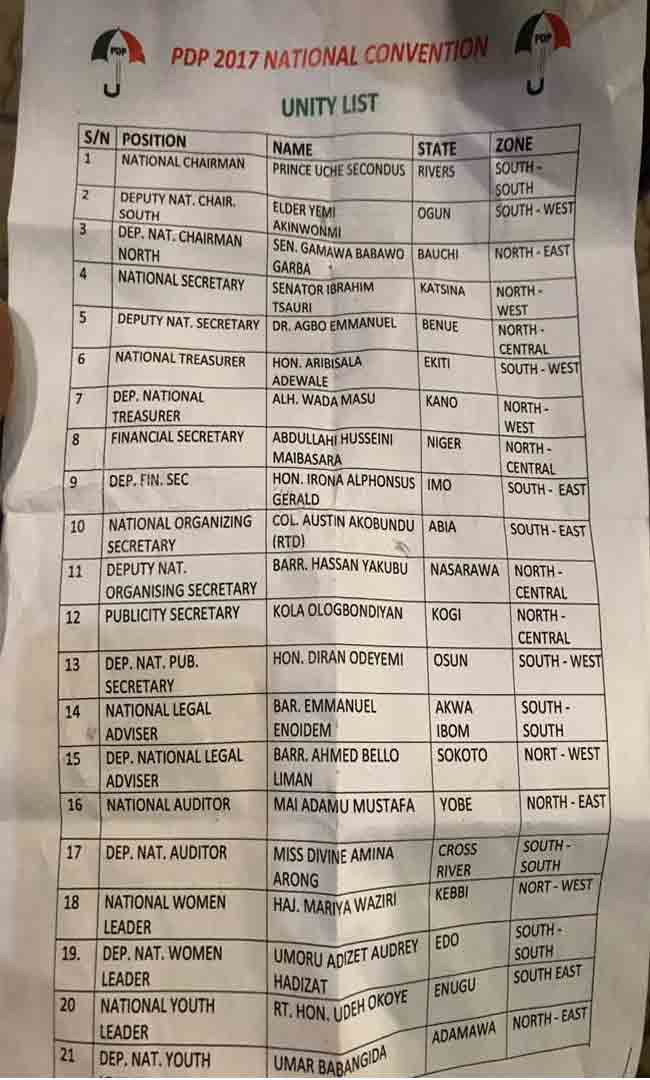 The emergence of the list has angered some delegates and Professor Tunde Adeniran and Raymond Dokpesi, the two candidates who were in the National Chairmanship race with Uche Secondus.

Around 9:40 pm, and ahead of the announcement of the results, Adeniran condemned the ‘Unity List’ and walked out of the convention in protest.

Adeniran’s camp accused the governors of Rivers State, Nyesom Wike, and his Ekiti State counterpart, Mr Ayodele Fayose, of being behind the list and of trying to influence the electoral process illegally.

The director of publicity of the Adeniran campaign, Mr Taiwo Akeju, told journalists at the Eagle Square in the nation’s capital, Abuja, where the convention is being held that the list was used to rig the process.

He said, “We reject the entire electoral process of December 9, 2017. The election has been grossly compromised to achieve a predetermined end in line with the illegal Unity List prepared by Governor Wike and Ayodele Fayose and foisted on the entire delegates.

“Consequently, we submit that this election is a sham and the result therefrom is unacceptable. We reject it in its entirety.

“We consider this so-called election as a travesty of democracy and due process, which further entrenches the culture of impunity that has done a great damage to the party in the past.

“Our position is also that this election should be cancelled and the entire leadership of the party should be handed over to the Board of Trustees which we regard as the conscience of the party, to organise a credible election for the party in due course”.