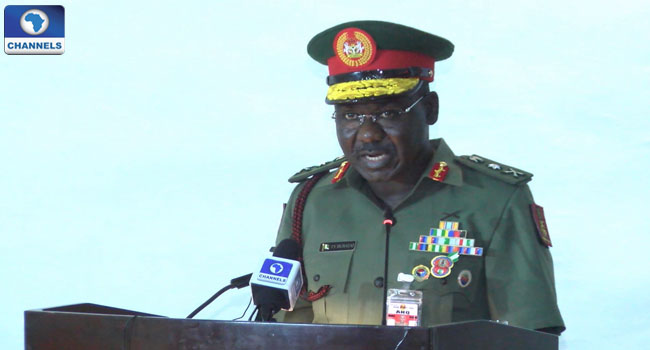 More than 200 female soldiers are being trained in counter-terrorism operations at the Army School of Infantry as part of efforts to tackle security challenges in the country.

The Chief of Army Staff, Lt General Tukur Buratai, disclosed this at the graduation ceremony of junior officers course 84 at the Armed Forces Command and Staff College, Jaji in Kaduna State.

After being trained, the female soldiers will be deployed in the North East and other troubled parts of the country to tackle existing and emerging security challenges.

At the graduation ceremony, General Buratai told army officers that much is expected from them in terms of keeping the country together and tackling security challenges, especially the ongoing counter-insurgency operations in the North East.

The army chief also urged the officers to always abide by the Rules of Engagement during any military operation and tackle every challenge with courage, conviction and in the most professional manner.

He said, “As you are aware, the objective of the college is to develop the professional knowledge and understanding of selected officers of the Armed Forces in order to prepare them for increasing responsibilities both in staff and command appointments.

“It, therefore, follows that it is not every officer within your category that would have the opportunity of being nominated for this course. Thus, I consider you privileged to have been nominated for this course by your respective services, organisations and countries. Most importantly, for having successfully completed the course, I say congratulations.

“You will be held to these standards not just as ambassadors of the Armed Forces but also as products of this prestigious institution of professional military education. You must, therefore, carry along these values and virtues wherever you find yourselves. As you may know, once the Commandant graciously confers on you the symbol ‘pjsc’, you cease having any excuse for not performing your duties as required.”

For the past 23 weeks, the officers who were drawn from military, paramilitary organisations and some African countries, were thoroughly subjected to various demanding tasks and exposed to presentations, lectures, discussions, exercises and even tours outside the college.

The objective of the course was to develop their professional knowledge and understanding, preparing them for increasing responsibilities both in staff and command appointments.

According to the commandant of the college, Air Vice Marshal Sulieman Dambo, the training was carefully put together for the officers to imbibe the “Cardinal Virtues of a Soldier”.

He said, “Today’s graduation ceremony formally marks the successful completion of yet another junior course. The course, which assembled on 5 July 2017, was initially made up of 173 students. Regrettably, however, only 171 students will be graduating today. This is because one student was withdrawn on compassionate medical ground while another was found not worthy in character based on indiscipline.

“It might also interest the Guest of Honour to know that there are seven international officers from the Republics of Benin, Mali, Rwanda, Sierra Leone, The Gambia and Zimbabwe on the Course.”

The Junior Course is a 23-week course of intense field training and academic activities designed to build the capacity of officers with the appropriate skills to function as Grade 3 Staff Officers and to prepare them to function effectively as junior commanders in their various military Services and organisations.

The course is also aimed at developing the command, analytical and communication skills of the students to equip them to efficiently operate during single Service, combined or joint and multi-agency operation.

A highpoint of the event was the conferment of the appellation ‘Passed Junior Staff Course’ on the officers.