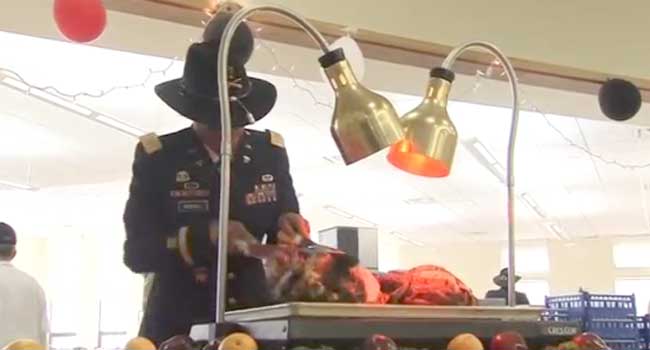 U.S. troops stationed in South Korea celebrated Christmas on Monday (December 25) with a traditional meal and a visit from Santa.

About 1,500 soldiers gathered at Camp Humphreys in Pyeongtaek, which lies about 100 km (60 miles) from the border with reclusive North Korea, and sat down for Christmas lunch which included roast beef, turkey, eggnog and a Christmas tree shaped cake.

Troops say they enjoyed the celebrations despite being far from their family.

About 28,500 U.S. troops are based in South Korea to help defend against North Korean hostility and maintain peace in the peninsula. North and South Korea remain technically in a state of war since the 1950-53 Korean conflict ended in an armistice.

“So it’s Christmas day and so Christmas is a very big family holiday and holiday you celebrate another successful year with bountiful blessings. So it’s typical the army especially when you are deployed, we are from Texas and we are away from our families at home, to put our big meal big spread so you can celebrate in style with your army family.”

US Suspends Flights By Chinese Airlines In New Spat With Beijing

FIFA’s Infantino Meets With Trump Ahead Of 2026 World Cup