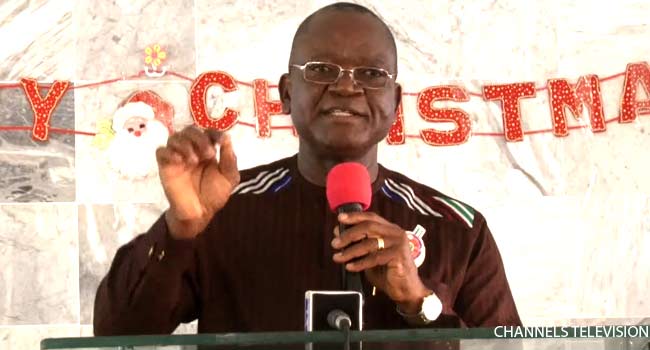 Benue State Governor, Samuel Ortom, has called for the arrest of the national leadership of the Miyetti Allah Cattle Breeders Association of Nigeria.

Governor Ortom made the call on Sunday while addressing a gathering during a church service in Makurdi, the state capital.

He said: “In particular the secretary and the president of this association (Miyetti Allah) that came out – they are on tape, they are on the papers – and issued this threat.

“They cannot go scot free, they must be arrested. We still want to repeat again that Federal Government should do this.”

The governor faulted the allegation by some members of the group that some Benue indigenes rustled about 1,000 cows as the reason for which dozens of people were killed in the state.

He, however, called on the Federal Government to order the arrest of Miyetti Allah leadership in a bid to ensure the people of the state get justice.

Following the recent attack on some communities in the state by suspected herdsmen, Governor Ortom has confirmed the death of at least 49 persons to Channels Television.

The latest attack was on Tombu village in Logo Local Government Area where 11 persons were killed on Saturday last week.

The governor who confirmed the number of casualties had commended the heavy presence of security personnel in the state.

He had, however, lamented that more than 40,000 people have been displaced for fear of unprovoked attacks.

The state government consequently declared three days of mourning for those killed in the attacks on communities in Logo and Guma LGAs.

In a statement issued on Monday by the Chief Press Secretary to the governor, Mr Terver Akase, the government also announced that those who were killed during the attacks would be buried on Thursday, January 11.

‘Finally, The Youths Are Awake’: Ooni Of Ife Backs #EndSARS

[UPDATED] At Least One Killed In Surulere #EndSARS Protest