Teachers’ Sack: No Amount Of Protests Will Make Us Change Our Position – El-Rufai 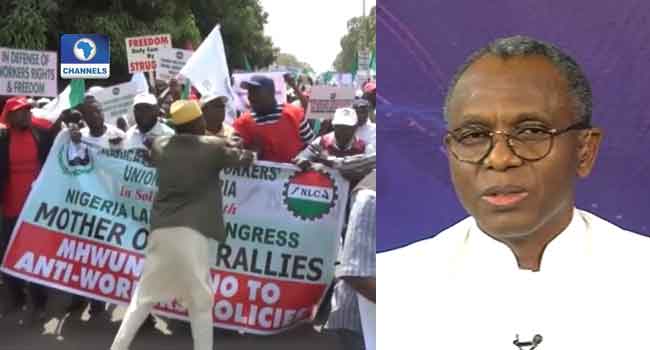 Governor Nasir El-Rufai of Kaduna State is sticking to his guns as far as his administration’s decision to fire over 21,000 teachers in the state. In an interview on Channels Television’s News At 10 on Thursday, the governor explained why he is convinced he is doing the right thing, despite the protests and criticism the move has attracted.

Did you envisage this magnitude of resistance when you decided to implement this decision on the teachers that failed the competency test?

We did. We debated this for a long time. This is a problem that we confronted within months of coming into office and we took extraordinary measures to steady the situation. We knew they would be a resistance but for us, education is one of the foundational components of building a modern society and we are not going to compromise on the quality of education and the quality of education relies on the quality of the teacher more than any other tool or infrastructure. We are investing in all of these and investing in the teacher is one of the most important one. We knew that they will be resistance; any attempt to improve a bad system meets resistance and we know that trade unions are not interested in national interest, they are interested in promoting the narrow interest of their members. So we knew that all these would happen but we are ready for it.

You have given a rather cogent reason for this decision but given the reactions that have trailed it, would you consider taking a second look at it?

We have already taken second, third and fourth looks at this situation. We have studied what previous governments have tried to do and there is no going back. I have absolutely no doubt in my mind that we are not going to reverse our decision; these teachers are gone, we are going to employ new teachers. The process of testing and interviewing the 25,000 teachers we are hiring to replace the 21,780 that we have fired is on and we are going to go ahead with it. As I said, it is the children of poor and ordinary people of Kaduna State that go to public schools. We are committed to ensuring that they get decent public education as I got it when I was growing up in Daudawa in Katsina State. I went to a public school and I got decent education. I was orphaned at the age of eight but I got free, basic education and that is why I am where I am. I intend, at whatever price, at whatever cost to bequeath that to children of ordinary people in Kaduna State. There is no going back.

What about the option of retraining? Some people have suggested that rather than an outright sack. What is your position on that?

Those that are suggesting retraining have not read our various statement on this issue. This administration of the APC in Kaduna State has already spent N650m on in the last two-and-a-half years since we took office. We have trained teachers, we have brought funds from the global partnership for education to train teachers. But you cannot train an illiterate to be a teacher. If a person is a mere illiterate, you cannot train him to be a teacher. You can only train someone who has the basic skills to be better. The situation we have in which people cannot answer questions that primary four people can answer, it means that they are incapable of being trained. Those that are talking about training do not get it. These ones that are going (sacked) are untrainable. They can do something else with their lives, and we will do everything to give them the opportunity to do so but not teaching. As I said, we are not going to compromise on the quality of the teacher, we intend to attract the best and brightest people to the teaching profession, we intend to pay teachers higher than normal civil service salaries because we believe in education, we believe it is the ladder that will provide social mobility as it has done in my life and that of the Deputy Governor and many of us in the Kaduna State government have enjoyed the benefit of decent public education. We will not compromise on that. We will not be blackmailed; we will not be intimidated. No amount of strikes or protest will make us change our position on this matter.

You mentioned that the government did train some teachers. Are they among the once that failed the competency test?

We are synthesizing the results of those that failed but it looks like a large percentage of the teachers we trained; some that were hired even with NCE certificates, some even with degree certificates in education failed the test which is a big shock to me because we posted these test (results) online for everyone to see the questions that those so-called teachers were failing; just to make the point that these people are beyond redemption. We cannot train them to be teachers. We can train them to do something else – absolutely, but not teaching. They are not qualified to teach.

At the moment, there is a disruption to the school system, what option would be considered to resolve this crisis?

We will do whatever it takes, and I say this with all sense of responsibility. We will adjust the school calendar to ensure that our children get the full term of school. We will do whatever it takes to ensure that we restore the quality of public education. As I said, we advertised for these positions (and) we got over 43,000 applications, we have given them NCE equivalent exams, they have been graded – I do not have the report of how many have passed, and the next thing is to interview them and then we check their certificates before we bring them into the classrooms but they will be ready to teach because they have bachelors of education or NCE and we will replace all these vacancies with them. Now, there is a claim that the NUT is on strike. We are monitoring that situation. Again, all those that have joined the strike or have absconded from the classrooms will be disciplined under the public service rules and we will replace them. We have enough pool of qualified teachers from all over Nigeria to replace those that are not qualified or unwilling to give our children quality education. We will not compromise on that.

Several Bandits Killed, Others Arrested By Troops In Kaduna LGAs