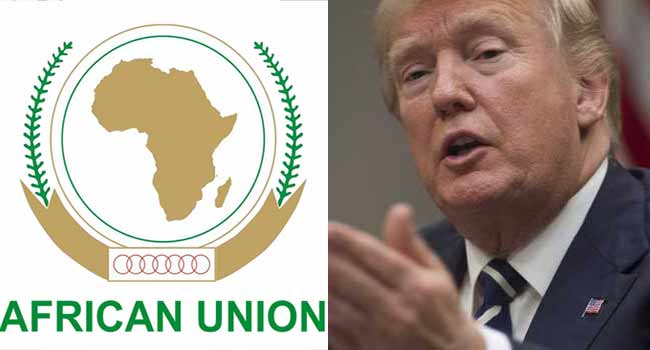 The African Union has expressed its disappointment and outrage over the comments made by US President, Donald Trump, about the continent.

A statement by the AU, dated January 12, 2018, said there is a huge misunderstanding of the African continent and its people by the current administration.

Trump reportedly demanded to know why the United States should accept immigrants from “shithole countries”, after lawmakers raised the issue of protections for immigrants from African nations, Haiti and El Salvador.

In reaction, the AU said member states value the strategic partnership with the US and therefore, noted that there is a serious need for dialogue between the US Administration and the African countries.

“While expressing our shock, dismay and outrage, the African Union strongly believes that there is a huge misunderstanding of the African continent and its people by the current administration. There is a serious need for dialogue between the US Administration and the African countries.

“The African Union, through its member states, values the strategic partnership with the US. This relationship should be from the point of equality and mutual respect based on accepted international principles of respect of basic human dignity for all.”

Furthermore, the AU demanded that the comments are retracted, and an apology tendered.

“The African Union Mission condemns the comments in the strongest term and demands a retraction of the comment as well as an apology to not only the Africans but all people of African descent around the globe.”