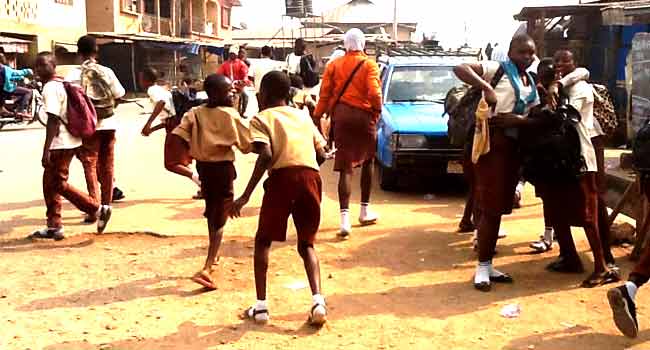 Thousands of government school students in Osun State were sent home on Monday over failure to pay their school fees for the second term.

Channels Television gathered that the students owing tuition fees were directed by their respective school’s management to vacate the premises of the school with immediate effect.

Sources said that the order to prevent such students from partaking in any form of academic activity commenced last week and continued on Monday morning as many of the defaulting pupils were spotted roaming the streets of Osogbo, the state capital.

Affected students who spoke to Channels Television urged the state government to be considerate and give their parents and give more time to pay their fees.

One of the students, Segun Adegoke, said he was owing N7,710 for the second term, explaining that the fees excluded N1,000 lesson levies per term and evidence of tax payment from his parent.

In a swift reaction, the State Commissioner for Education, Mr Kola Young, denied the allegation that the students were sent home over unpaid school fees.

In a text message sent to Channels Television, Young said they only directed students to show evidence of payment by their parents or guardians of taxes and education trust levies.

The message read: “School fees are not paid in any Osun public, elementary, middle or high school; so, no student in Osun schools can or should be sent home for any school fees.

“Students, however, have been directed to show evidence of payment by their parents of taxes and education trust levies. We all know that everywhere in the world, successful economies depend on the payment of taxes by their productive citizens”.