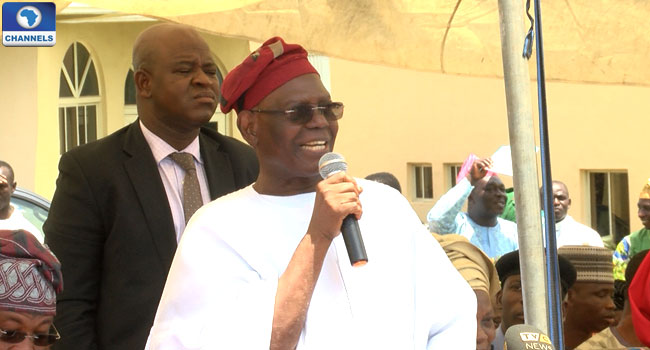 The former interim National Chairman of the All Progressives Congress, Adebisi Akande, says a total change of the country’s constitution is the solution to the problems facing the country.

Akande stated this on Tuesday in his home town, Ila-Orangun in Osun State as he marked his 79th birthday.

He told journalists that no solution proffered to the country’s  problems would work under the current system.

“In Nigeria’s Presidential System of government, lawmakers are elected on party platforms, but as soon as they get to the parliament, the party on which platform they get the opportunity, becomes less important,” he said.

“All that is important at that level is the collective interest of the members of that parliament. Party’s programmes and manifestos are no longer important. That has been the major problem facing the country. Let’s dump this corrupt presidential system and go for the more transparent Parliamentary System.”

Akande experienced the dangers of the current system of government during his time as a governor.

He said, “As a governor in 1999, my administration worked with a parliament that had 26 members all voted in on the platform of my party. Despite this, the assembly decided not to support the programmes of the party that gave them an opportunity.

“They served me impeachment notice. On the day the motion was moved, 24 members all from my party voted in support of my removal, one voted against it and the Speaker did not vote.

“I was given 21 days. On the day they sat again on the matter, 13 said no to my impeachment and 12 said I should be removed. The Speaker did not vote. Same party that produced the lawmakers also produced me as governor. I believe, even if an angel is sent to administer this kind of unworkable system, he will fail.”

While advocating a multi-party parliamentary democracy for Nigeria, the elder statesman said that the current system of government allows for manipulation by those in the positions of authorities.

He believes the President Muhammadu Buhari has faced setbacks as a result of the system.

According to Akande, President Muhammad Buhari is working under a very difficult situation with the unworkable and ineffective system.

To address the security challenges in the country, he called for a decentralised police.

FG Poised To Do Much More Through ESP – Presidency