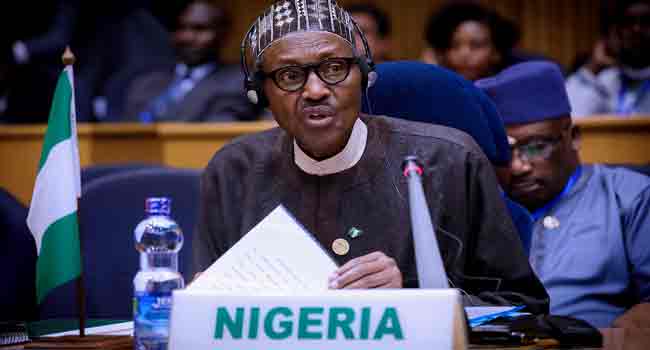 President Muhammadu Buhari said on Saturday that there was a need to curb the flow of terrorism financing.

President stated this at the meeting of the African Union Peace and Security Council in Addis Ababa, the Ethiopian capital.

Speaking on the theme, “Towards a Comprehensive Approach to Combat the Transnational Threat to Terrorism,” Buhari called for the cooperation of other African leaders to fighting the menace.

“The need to curb the flow of terrorism financing cannot be over-emphasised. Concerted efforts must be made to not only dismantle the network between transnational organised crimes and terrorist organisations but also to block the payment of ransom to terrorist groups,” he said.

He also cited the UN Resolution 1373 which stressed that “any person who participates in the financing, planning, preparation or perpetration of terrorist acts should be brought to justice.”

The Nigerian leader called for resolute and coordinated initiatives by developing an African Union database of persons or groups and entities involved in terrorist acts for use by law enforcement agents.

“Nigeria believes that the timely establishment of this tool at the continental level will be strategic in this fight,” a statement from the Senior Special Assistant to the President on Media and Publicity, Mr Garba Shehu quoted Buhari as saying.

This is coming after he condemned in the strongest terms the continued activities of the terrorist groups in the continent and around the world.