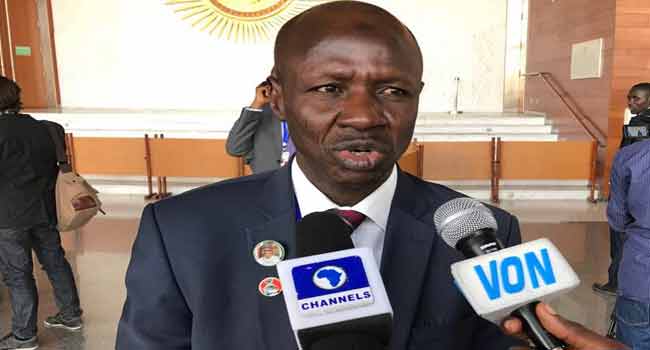 The Acting Chairman of the Economic and Financial Crimes Commission (EFCC) Ibrahim Magu on Monday said it is important that African leaders support Nigeria’s President in his war against corruption.

On July 4, 2017, African leaders unanimously endorsed President Muhammadu Buhari to champion the fight against corruption on the continent. The endorsement took place during the 29th Session of the AU and was in recognition of his personal commitment and acclaimed anti-graft drive at the domestic level.

President Buhari accepted his nomination on July 25, 2017, in a letter to President Alpha Conde of Guinea, the outgoing AU Chairperson.

Mr Magu at the ongoing 30th AU summit in Addis Ababa told journalists that African leaders must therefore support President Buhari in his task as the champion of AU’s fight against corruption for successful anti-corruption war.

The head of Nigeria’s anti-corruption agency said further that the political will is the driving force of fight against corruption and that the agency is committed to continue its fight despite the many challenges.

Buhari on Friday, January 26 left Abuja for Ethiopia to participate in the 30th Ordinary Session of the Assembly of Heads of State and Government of the African Union (AU).

On Sunday, January 28, he said in Addis Ababa that corruption is one of the greatest evils of our time.

This was during the formal launching of the African Anti-Corruption Year 2018 and the Opening Ceremony of the 30th Ordinary Session of the Assembly of Heads of State and Government of the African Union in the Ethiopian capital.

“Corruption is indeed one of the greatest evils of our time. Corruption rewards those who do not play by the rules and also creates a system of distortion and diversion thereby destroying all efforts at constructive, just and fair governance,” Buhari said.

The AU Summit is themed “Winning the Fight against Corruption: A Sustainable Path to Africa’s Transformation.”

This is the first time in the 54-year history of the AU that anti-corruption will be made a theme of the gathering of the regional leaders.