Ekwueme’s Death A Raw Pain Only God Can Heal – Obiano 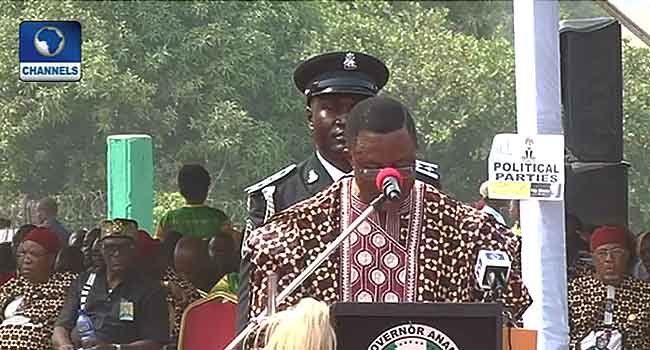 Governor of Anambra State, Willie Obiano, has expressed his deepest sadness over the death of Nigeria’s former Vice President, Alex Ekwueme, who he described as very dear to him.

Obiano made this known during a commendation service held on Thursday in honour of the late elder statesman at the public square in Awka, which was named after him.

According to him, he shared a father-son bond with Ekwueme and the pain caused by his death is one that will only be healed by God.

“On a personal level, this death has been a huge blow to me. Having lost my dear mother in June last year, nothing prepared me for the loss of someone who is like a father to me five months later.

“Ekwueme’s death is a raw pain which only God can heal. We had a father-son relationship that made me look forward to his private visits and his attendance at most of my events”.

Obiano, however, extolled his qualities and urged the people continue to uphold the rich legacies that he left behind.

“It is a mark of greatness of Ifeanyi Alex Ekwueme that the ideals that he invested his youth and old age in have remained the dominant issues of our time and resonant questions for the future generations.

“Indeed there can be no true mark of greatness and this is what makes it compelling for the federal government to immortalise this great man by naming a national monument after him.

“This should not only strengthen the walls of national unity but also ensures that the sacrifice of this great compatriot do not go in vain.

“Ekwueme left us a proud heritage so, rather than grieve and mourn over his passage, I urge you all to celebrate the life and times of a man who came clearly ahead of his time and did his best to make Nigeria a better place for everyone,” he said.

The former Vice President died at a hospital in London United Kingdom on November 19, 2017 following a respiratory illness.

His remains returned to Nigeria on Monday, and after a week-long series of events, he will finally be buried at his hometown in Oko Anambra state, on February 2.

How Ekwueme Left A Remarkable Legacy In Politics – Anyaoku