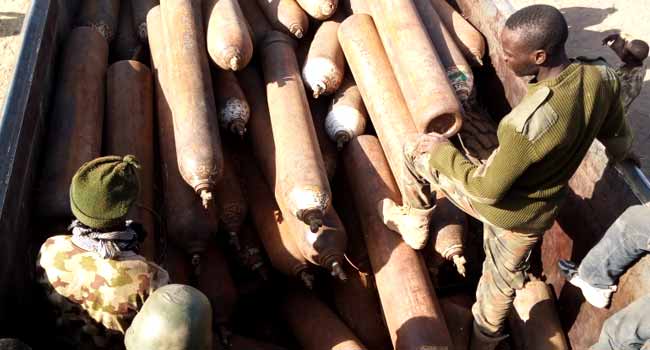 The Nigerian Military has destroyed a Boko Haram Improvised Explosive Device (IED) making-factory while several terrorists were killed in the process.

The Deputy Director of Public Relations at the Theatre Command of Operation Lafiya Dole, Colonel Onyema Nwachukwu, disclosed this in a statement signed by him on Wednesday.

According to him, the soldiers recorded the feat on Tuesday as part of earlier successes made in the conduct of Operation DEEP PUNCH II in the last four weeks.

Colonel Nwachukwu noted that the offensive and clearance operation has led to severe depletion of the terrorists and destruction of several of their enclaves in the fringes of Lake Chad and the Sambisa forest in Borno State.

In the course of the operation, the troops, closely supported by the Nigerian Air Force further exploited deep into the far ends of Camp Zairo and aggressively carried out an offensive against insurgents defending a major IED making factory.

The gallant soldiers successfully engaged the terrorists, demobilised their vehicle-borne IEDs and killed quite a number of them, as well as captured the IED making factory.

Other items recovered include one Motorola GP 180, theodolite and two Global Positioning Systems (GPS), while the troops destroyed 22 motorcycles, 18 bicycles and provisions store.

The Theatre Command spokesman noted that buoyed by the unprecedented success, the soldiers’ morale remains high as they are unrelenting in ensuring the imminent and total clearance of the remaining Boko Haram terrorists.

See photos of recovered items below;