Killings: Security Agencies Must Stay Ahead Of Criminals ‘At All Times’ – Buhari

President Muhammadu Buhari has ordered all security agencies in the country to be proactive in their duties and stay ahead of criminals at all times.

The President revealed this in tweets on Monday, hours after he held an expanded security meeting attended by Vice President Yemi Osinbajo in addition to the security chiefs in Abuja.

“Our law enforcement agencies must at all times stay ahead of bandits and criminals, wherever they are across the country, by efficiently gathering, sharing and acting on credible Intelligence.

“I am assuring (Nigerians) that we will give them (the security agencies) all the support needed to succeed,” he said.

READ ALSO: Buhari Vows To Implement Solutions That Can Stand ‘Test Of Time’

Giving a brief on what was discussed at the meeting, the President said one of the resolutions adopted was that all the law enforcement agencies must take intelligence gathering and sharing, much more seriously. 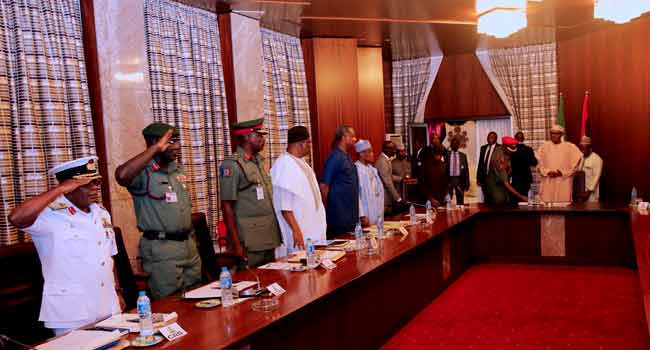 He further directed the security agencies, especially the Police and the Department of State Service to step up their efforts and capacity in the regard.

On the killings that claimed the lives of several people in parts of the country, President Buhari assured Nigerians that all persons arrested so far, including those arrested for illegally possessing arms, would be duly prosecuted.

He also appealed to judicial officers to be alive to their responsibilities and ensure the speedy dispensation of justice.

The security meeting was also attended by the Minister of Defence, Brigadier General Mansur Dan-Ali (rtd); Minister of Foreign Affairs, Mr Geoffrey Onyeama, and the Minister of Interior, Lieutenant General Abdulrahman Dambazau, among others.

At the end of the meeting, the security chiefs and others present had declined to brief State House correspondents on what was discussed.

But President Buhari had said on Twitter that he was fully aware of the seriousness and urgency required by the nation’s security.

Buhari Contravened The Law On Appointment Of 11 Judges – Court