Boko Haram: Shekau On The Run Dressed As A Woman – Army 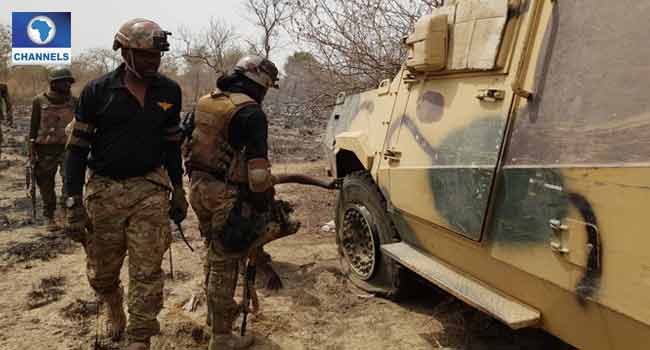 Months of military operations in the North East to clear the remnants of Boko Haram have forced the terrorist group’s leader Abubakar Shekau to go on the run – disguised as a woman.

The Nigerian Army disclosed this on Tuesday, citing information from captured insurgents.

“Credible information from arrested and surrendered insurgents indicated that the purported Boko Haram terrorist group factional leader, Abubakar Shekau could not bear the heat anymore as he has abandoned his followers, he is running for his dear life,” a statement by the Director Army Public Relations, Brigadier General Sani Kukasheka Usman, said.

“He is desperately trying to escape the theatre disguised as a woman dressed in Hijab. We reliably gathered that to avoid detection Abubakar Shekau alternates between blue and black coloured hijabs. He was last seen in a black hijab.”

This comes three days after Boko Haram freed three University of Maiduguri lecturers and 10 women it abducted in a deadly ambush on July 25, 2017.

After years of brutal attacks and abductions which have left thousands dead, millions displaced and created a humanitarian crisis in the North East, the Nigerian military has decimated Boko Haram, declaring that the group defeated.

Its leader, the notorious Abubakar Shekau has, however, remained elusive and defiant in his videos, with the latest released on February 7.

The military which has recovered battle tanks and continued to clear terrorist’s camps in Sambisa Forest, under Operation DEEP PUNCH II, is confident that the battle is all but won.

With Shekau believed to be on the run and “last seen” wearing “a black hijab”, the army is calling on his remaining followers to surrender.

“We, therefore, call on all those remaining Boko Haram terrorists to know that they are following a coward moving about in hijab disguised as a woman,” the army said.

“We also request that all the remaining Boko Haram members come out from hiding and lay down their arms and be treated humanely.”

Beyond forcing Shekau to flee, the army said the concerted efforts troops of Operation Lafiya Dole in the ongoing clearance of Boko Haram, through Operation DEEP PUNCH II, has paid off in other ways.

“Troops have also rescued civilians being held hostages by the terrorists, recovered arms, ammunition, Improvised Explosives Diveces (IED) factories and making materials as well as other equipment,” the army said.

“Consequently, the terrorists are in disarray and scampering for safety while others were surrendering.”

The army assured Nigerians that concerted efforts are ongoing to arrest the fugitive terrorist leader and appealed to members of the public, especially residents of Adamawa, Borno and Yobe states to be more vigilant, security conscious and be on the look our for Abubakar Shekau and other terrorists that might disguise as women to escape.