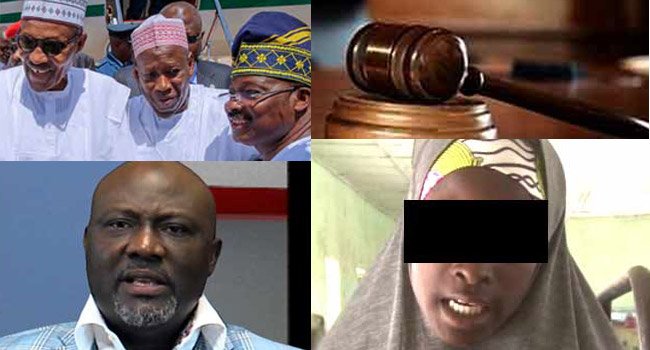 It was another week of breaking stories, shocking attacks in the northeast and on a lighter note, a bit of fun discussions from the Social Media Week held in Lagos.

The week, however, saw more bloodshed and while the government has continued to promise that its war against insurgents is one that has relatively been a success, some believe that an end may not yet be in sight for the tensions in the northeast, following fresh attacks in the region.

One of the major incidents and a topic of many discussions was an attack on the Government Girls Science Technical College (GGSTC), Dapchi, Yobe state Nigeria by suspected Boko Haram terrorists.

The attack in which over 100 students were abducted, threw the community into tears as it also brought back memories of a similar case in 2014 on Chibok town in Borno state.

Following the incident, the Federal, as well as the state governments and security agencies, have been on their toes to ensure that all the girls are rescued albeit, not without major criticism from many who believe the Federal Government failed to learn lessons from the previous incident.

As days went by, parents of the missing students this time decided to take deliberate steps by forming an association in order to ensure that their missing daughters are found.

Meanwhile, five students of the school, who fled when the suspected Boko Haram terrorists invaded their school have returned and narrated their ordeal. Read more here.

Another disheartening occurrence was the attack by insurgents on an Internally Displaced Persons Camp In Rann, Borno state, that left at least three aid workers dead and many IDPs injured. Read the reaction of the UN here.

At least seven people were killed and 15 others persons severely injured following the violence that broke out in Kasuwa Magani village in Kajuru Local Government Area of Kaduna State.

The spokesman for the State Police Command Mr Aliyu Mukhtar, who confirmed the figure to Channels Television on Monday, also said several houses were destroyed during the crisis.

A clash was said to have erupted on Sunday between youths belonging to two different religious groups in Kasuwa Magani village. Read more

Four persons have been reported killed in a fresh communal clash that erupted between some herdsmen and the Mambilla ethnic group on the Mambilla Plateau in Taraba State.

Several houses and other valuables were reportedly set ablaze by the warring factions, as both sides were said to have recorded casualties after the clash which happened on Thursday in Sardauna Local Government Area of the state. Read more

On a more positive note, however, President Muhammadu Buhari met with the three recently released lecturers of the University of Maiduguri and 10 o0ther women abducted by insurgents in the Northeast.

During the meeting which was held on Monday in Abuja, the President restated the government’s commitments in rescuing all those abducted by the insurgents especially the recent kidnap of over 100 secondary school girls from Dapchi. Read more here.

It was also a week of joy for the presidency as wife of the President, Mrs Aisha Buhari, confirmed the return of her son, Yusuf, from a medical trip abroad, more than two months after he got injured in a bike accident. Read here.

No Assent To Peace Corps Bill

For reasons relating to financial constraints, the President withheld assent to the bill seeking to establish the Peace Corps.

He informed the lawmakers of his decision in a letter reading during plenary on Tuesday by the Speaker of the House of Representatives, Yakubu Dogara. Read more here.

Into crime and political matters, a Federal High Court in Abuja granted bail to the Senator representing Kogi West Constituency, Senator Dino Melaye, in the sum of N100,000 and one surety, who is not less than a level 14 in the Federal Civil Service. Read more here

Senator Melaye was charged to court on a two-count charge of giving false information against the Chief of Staff to the Kogi State Government, Edward David.

He, however, pleaded not guilty to the two-count charge. Read more here, INEC Fixes General Election Dates For 36 Years.

The Federal High Court Sitting in Lagos ordered the final forfeiture to the Federal Government of two penthouses valued at $4.760m, allegedly linked to the former Minister of Petroleum, Diezani Alison-Madueke. Read more

Dariye was arraigned by the anti-graft agency on Tuesday on six counts of money laundering to the tune of N1.5billion. Read more here

The Independent National Electoral Commission fixed and announced dates for general elections in the country for the next 36 years.
This covers the 2019 elections up to the year 2055.

INEC Chairman, Professor Mahmood Yakubu, announced the decision at a meeting with leaders of political parties in the nation’s capital, Abuja on Wednesday. Read more here

Tax Evaders To Be Prosecuted

On finance, the Federal Government revealed plans to aggressively go after tax evaders to prosecute them and publicly reveal their identities.

Through the Ministry of Finance, the government said tax evaders will be prosecuted, named and shamed using its the Voluntary Assets and Income Declaration Scheme (VAIDS) which will end by March 31, this year.

On a lighter note, it was a beehive of activities at the sixth edition of the Social Media Week held in Lagos, with various interactive sessions, speeches, workshops, master classes, presentations and networking.

One of the interactive sessions was a conversation with the Chairman and CEO of Channels Media group, John Momoh (OON), where he talked about the future of broadcasting. Read here

Other speakers, also addressed topics on the use of social media as a catalyst for change while attendees were allowed to throw in questions.

See photos of other side attractions at the event here.

Also, the President and the national leader of the All Progressives Congress (APC) Mr Bola Tinubu attended the wedding ceremony of the children of Kano and Oyo state governors, Abdullahi Ganduje and Abiola Ajimobi.

The wedding of Ganduje’s daughter, Fatima, and Ajimobi’s son, Idris, held on Saturday at the palace of the Emir of Kano, Muhammadu Sanusi II, in Kano State, North-west Nigeria.