Buhari Meets With Farmers, Miyetti Allah, Others In Benue 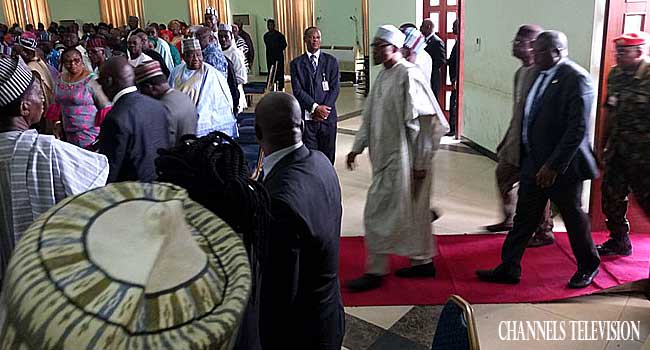 President Muhammadu Buhari on Monday held a stakeholder meeting with various groups in Benue State in the bid to find a lasting solution to the incessant attacks and killings in the state.

President Buhari, who arrived Makurdi Airport at 10:43 a.m. held the meeting at the Government House in Makurdi, the Benue State Capital.

The meeting had in attendance, Benue State Governor Samuel Ortom and other top government officials in the state. 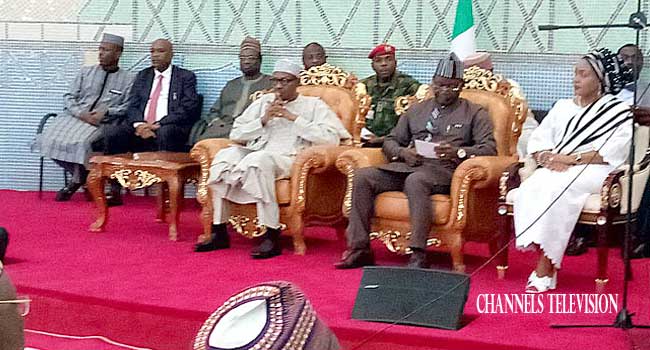 During the meeting which was held at the Government House in Makurdi, Benue State capital the groups explained their various positions over the killings. The Miyetti Allah group during the meeting denied involvement in the incessant killings while the farmers appealed to President Buhari to take steps to end the killings.

Speaking during the meeting with President Buhari he claimed this allegation is ‘totally misleading’.

“The association has always appreciated peaceful and harmonious coexistence between farmers and herdsmen,” he said.

He added that “Going forward, there will be peace in the state. Let bygone be bygone to allow peace and security to prevail.”

Haruna also called on all stakeholders to support the government to achieve peace.

The representative of Benue farmers, Mr Terlumun Akputu in his address said the peasant farmers are threatened by starvation as a result of the increased attacks.

“More than 160, 000 of peasant farmers are now refugees in their own land because of the herdsman attacks on their communities and farms,” Akputu said.

He asked President Buhari to put in place irrigation and farm input programmes to help the farmers recover from the loss of their farmland, food, and source of livelihood.

The commander, Benue State Livestock Guard, Mr Aliyu Tershaku denied allegations that the security agency is head of the militia in Benue State

He said the group has been working with the National Security Adviser; Babagana Monguno dutifully and lawfully.

According to Tershaku, Benue State Livestock Guard has carried out successful operations to arrest cattle rustlers and other criminals in Benue and Nasarawa state

The livestock guard in Benue State has been working in harmony with herdsmen.

Tershaku said herdsmen and farmers in the state have been working together to ensure smooth operation against cattle rustlers and criminal elements fomenting trouble in the region.

The Benue Joint Sociocultural Group Mzough U-Tiv has claimed that herdsmen attacks in Benue State predate the anti-grazing law which bans open-grazing of cattle in the state.

The group which was led by Mr. Edward Ujege alleged that the attacks date back to eight years ago.

Ujege said former Governor Gabriel Suswam was once a victim of the attacks. Suswam, according to Ujege was attacked in broad daylight in 2014 while he was in office.

He also appealed to President Buhari to find a lasting solution to the killings of Benue people.

We Will Not Back Down Until We #EndSARS – Protesters

Nigeria Heading For Another Recession, To Recover In 2021 – Buhari