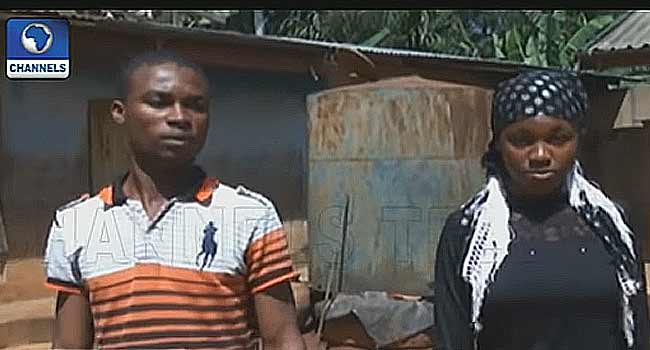 Two siblings in Ekwulobia community of Agwata Local Government Area, Anambra state, have explained the reasons behind their decision to get married to each other.

The groom, 23, and his bride sister, 17, in an exclusive interview with Channels Television on Sunday, said the decision, followed an encounter their brother had with God.

Narrating how it all began, the senior brother said God revealed some bible scriptures to him in a vision, in which he explained that his sister was the perfect bride for his brother.

“He said to me, the bone of your bone and flesh of your flesh is your blood, your immediate family”.

On his part, the groom explained that he accepted the revelation and subsequently on January 15, made the announcement to the entire family that they had both agreed to get married.

The young bride who appeared happy while speaking to Channels Television explained that she had accepted the situation, although she still has the stigma from school and the community at large, to contend with.

Their mother also explained that the neighbours no longer interact with them as the community described the situation as a taboo.

While the matter is still being trashed before the community leaders, she says only God can be the judge of case.

“They said it’s a taboo and an abomination and until cleansing is carried out then the communion will start again and the community is preparing to carry out the cleansing.

“But no matter the cleansing, it’s only God that can neutralize any abomination, if any.”

Meanwhile, a priest in the community, Reverend Samuel Chukwuka, believes the decision to conduct the marriage was born out of ignorance and therefore, it is “of the devil”.

“Let us watch that family for some years, you will see what happens. Science has even said some of them will get mental,” he said.

Attacks: All Gunmen Caught In Anambra Are Igbo, Says Soludo