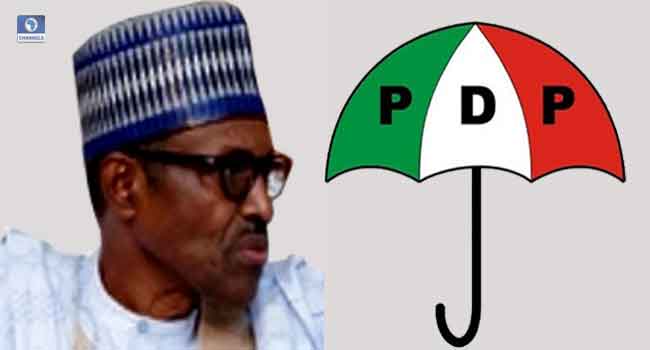 The Peoples Democratic Party (PDP) has yet again criticised President Muhammadu Buhari’s administration, describing it as incompetent, disorganised and uncoordinated.

The criticism follows the President’s comments about the Inspector General of Police (IGP), Ibrahim Idris, flouting his orders regarding the security situation in Benue State.

During a meeting with stakeholders in the state on Monday, the President said he was not aware that the IGP had left Benue for Nasarawa after he was ordered to relocate to the state.

Although the IGP visited Benue after the President’s directive, the state government accused him of spending only one day in the state after which he proceeded to Nasarawa state and spent several days there.

Through its spokesman, Kola Ologbondiyan, the PDP on Tuesday said that President Buhari’s explanation on the IGP is also an admission that he has handed over power to a cabal that neither sought for votes nor were they elected by Nigerians.

The party said the President has irredeemably indicted himself adding that such “unpardonable slipshod” attitude to governance is directly responsible for his government’s wrecking of the nation’s once robust economy as well as other woes that have befallen the nation in his almost three years in office.

Furthermore, the party warned the APC and supporters of the President to take their minds off the Aso Villa ahead of 2019 election now that their leader and the sole candidate has practically admitted his incompetence to run an effective government as desired by Nigerians.

Read Also: I Never Knew IGP Moved To Nasarawa After I Sent Him To Benue – Buhari

It also criticized the President for trying to pass the buck to the IGP, a development which it said further exposed his lack of direct commitment and concern toward the well-being and security of Nigerians.

Read the statement below.

“Nigerians have completely lost hope in President Muhammadu Buhari and his incompetent administration. By stating that he was unaware that the IGP only spent 24 hours in Benue state, Mr President has confirmed that he has not been effectively monitoring the handling of the security situation of our nation.

“This places a huge question mark on the regular assurances issued from the Presidency on security.

“For our party, PDP, the expression of President Buhari has once again vindicated our position that our nation has been placed on autopilot cruise with a cabal pretending to be managing our affairs.

“Indeed, Nigerians need to know; what exactly did President Buhari, as the Commander-in-Chief, do when he realized that the IGP did not carry out his orders? We demand a direct answer from the Presidency.

“The fact is that there is no sense of remorse by the Government as the President himself spent only two hours in Benue state without visiting the victims or even making any direct policy statement on those behind the killings and how to forestall future bloodletting. Rather, in the character of this government, Mr President engaged in yet another blame game instead of facing issues.

“If the Presidency is not committed to monitoring critical issues such as security, then Nigerians are no longer in doubt as to why other sectors, particularly our once robust economy, had gone comatose under the Buhari administration.

“Moreover, Nigerians are miffed that while the wailings over these daily bloodletting are yet to abate, President Buhari is busy announcing his plans to return to Benue to seek for another round of votes.

“This shows clinically that Mr President is truly not aware that Nigerians have since abandoned him in his state of unawareness.

“We have a government that was so careless, that it even had names of dead persons in the list of appointees to federal boards.

“Again, we maintain that our nation has been on auto-drive under the APC and Nigerians cannot wait to end this nightmare come 2019″.

The party, therefore, called on other Nigerians to support their plans to return to power in 2019.

PDP Is A Leopard That Can’t Change Its Spot, Keyamo Replies Melaye

2023: Top 8 Priorities Of Peter Obi On Getting Into Office

PDP Is A Leopard That Can’t Change Its Spot, Keyamo Replies Melaye