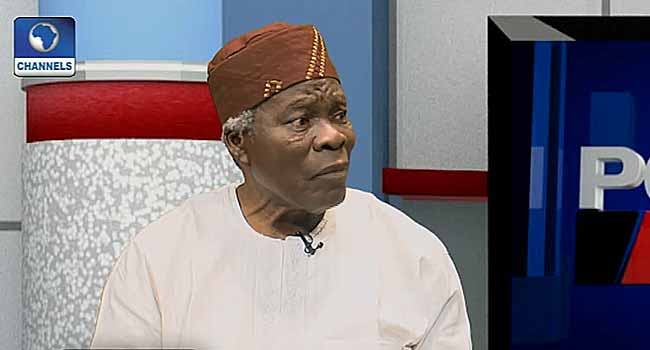 Historian, Professor Banji Akintoye, has supported the proposition that the Federal Government should declare killer herdsmen across the country as terrorists.

According to him, they appear to be more dangerous than Boko Haram terrorists and therefore, must be stopped before their activities get out of hand.

He addressed the issue when he appeared as a guest on Channels Television’s Politics Today, Thursday.

“We can’t have a country in which people feel that they are free to move around, killing people at random and at will. We cannot have a country like that, obviously, these are terrorists and the government owes Nigeria the duty of getting them out of Nigeria.

“They are all over Nigeria, there is no state in the middle belt and the south that they have not killed people in so they are more dangerous than Boko Haram,” Akintoye said.

This comes barely 24 hours after Nobel Laurette, Professor Wole Soyinka asked the Federal Government to declare the criminals as terrorists.

He also advised that the government should give a stern and final warning to perpetrators of the wanton killings across states in the country.

“We’re speaking of governance, will, and responsibility, the readiness to respond with massive punitive action when the fundamental security of a people is violated.

“We’re speaking of the courage to decree such monsters terrorists and enemies of humanity with the same dispatch as the declaration of fireless violent, far less destabilising movements, albeit disruptive, supernaturalism and sometimes nasty in their attestation and activities,” Soyinka said while delivering his keynote speech at the Ripples Nigeria Dialogue; an annual forum designed to broaden the conversation on issues troubling Nigeria.

Rating the performance of President Muhammadu Buhari’s administration and what he thinks about a coalition against the government, Akintoye said: “ I think Buhari should not continue to rule us anymore”.

“Well I don’t know how it may work and I don’t really care how, all I want is that Nigerians should unite and get Buhari and his government out of the place of the Federal Government of Nigeria because Buhari is destroying our country.

“Look at what he is doing with people who are going around killing.

“You send your men to those places and the killings are going on there, it’s all kid gloves. There is nothing concrete happening,” he stressed.

When asked if he thinks a political coalition, especially with a major opposition party, might do ‘wonders’ in 2019, he said; “I hope so, I will desire so because I think that Buhari should not continue to rule us anymore.

A former FCT NBA Chairman, Victor Ekim who was also on the show, believes that with the dissatisfaction of many, the Buhari administration may need to take a break.

“The only constant thing is change, change brought in the APC and if the entire nation is dissatisfied with the state of affairs in the country, then the only thing necessary is change.

“I just hope this coalition will get its acts together and give the APC a run for its money,” he said