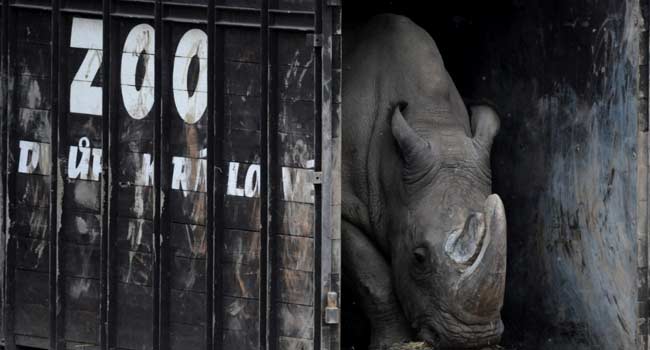 Sudan, the last male northern white rhino, has died in Kenya at the age of 45, after becoming a symbol of efforts to save his subspecies from extinction, a fate that only science can now prevent.

When Sudan was born in 1973 in the wild in Shambe, South Sudan, there were about 700 of his kind left in existence.

At his death, there are only two females remaining alive and the hope is that in-vitro fertilisation (IVF) techniques will advance enough to preserve the sub-species.

Sudan, elderly by rhino standards, had been ailing for some time and was euthanised on Monday, according to his keepers at the Ol Pejeta Conservancy, where he lived under armed guard to prevent would-be poachers.

“Sudan had to be put down because of various complications that are age-related. He was suffering from acute arthritis that weakened his limbs,” Samuel Mutisya, head of conservation at Ol Pejeta Conservancy told AFP.

Ironically, Sudan’s death comes as hundreds of scientists and government envoys gather in Colombia at a biodiversity crisis summit for a global appraisal of mass species extinction.

“We on Ol Pejeta are all saddened by Sudan’s death. He was a great ambassador for his species and will be remembered for the work he did to raise awareness globally of the plight facing not only rhinos, but also the many thousands of other species facing extinction as a result of unsustainable human activity,” said Richard Vigne, Ol Pejeta’s CEO.

Wiped out by poaching

Rhinos have few predators in the wild due to their size.

However, demand for rhino horn in traditional Chinese medicine and dagger handles in Yemen fueled a poaching crisis in the 1970s and 1980s that largely wiped out the northern white rhino population in Uganda, Central African Republic, Sudan and Chad.

A final remaining wild population of about 20-30 rhinos in the Democratic Republic of Congo died out during fighting in the late 1990s and early 2000s, and by 2008 the northern white rhino was considered extinct in the wild.

Modern rhinos have plodded the earth for 26 million years. As recently as the mid-19th century there were more than a million in Africa. The western black rhino was declared extinct in 2011.

In the 1970s, Sudan “escaped extinction in the wild”, when he was shipped to the Dvur Kralove Zoo in the Czech Republic.

He did manage to sire two females while at the Czech zoo. His daughter Najin, 28, and her daughter Fatu, 17 are the two females left alive at Ol Pejeta.

Then in 2009, Sudan, another male and the two females were shipped to Ol Pejeta in Kenya, with high hopes that conditions similar to their native habitat would encourage breeding.

However, despite the fact that they were seen mating, there were no successful pregnancies.

Further efforts to mate a male southern white rhino with the females — and thus conserve some of the northern white genes — were also unsuccessful.

The other male rhino, Suni, died of natural causes in October 2014.

However, scientists have gathered Sudan’s genetic material and are working on developing IVF techniques to preserve the subspecies.

Sudan gained worldwide fame in 2017 after he was featured on the popular dating app Tinder in an effort to raise money for the IVF procedure — which has never been done with rhinos.

The plan is to use sperm from several northern white rhino males that is stored in Berlin, and eggs from Najin and Fatu and implant the embryo — which will be created in an Italian laboratory — in a surrogate southern white female, according to Ol Pejeta.

Sudan’s “death is a cruel symbol of human disregard for nature and it saddened everyone who knew him,” said Jan Stejskal, Director of International Projects at the Dvur Kralove Zoo.

“But we should not give up. It may sound unbelievable, but thanks to the newly developed techniques even Sudan could still have an offspring.”

Even if the subspecies can be revived, their natural habitat is still too dangerous for them, but Samuel Mutisya, head of conservation at Ol Pejeta, says there is still hope.

“It will take many years to have a substantial population of northern white rhinos, and you can’t predict what Central Africa will be like in 10 years.”

Buhari Govt Doing More For The Interest Of The Nation, Says Mines Minister