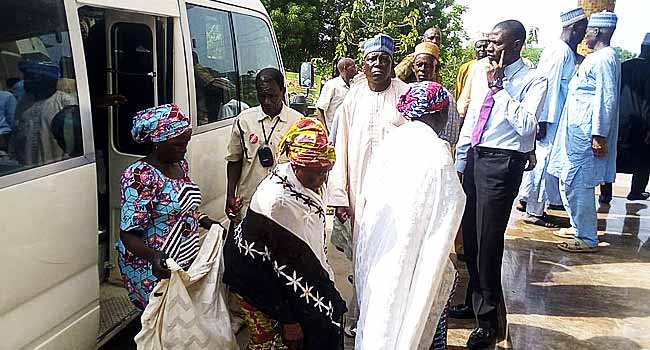 Parents of the remaining Chibok girls who are yet to be released by Boko Haram terrorists, on Saturday, met with former President Olusegun Obasanjo in Abeokuta the Ogun state capital.

Addressing them at the Olusegun Obasanjo Presidential Library, the former president asked them not to lose faith and confidence in God despite their anguish.

Thier visit comes days after the Federal Government secured the release of students who were equally abducted from the Government Girls Science Technical College (GGSTC), Dapchi, Yobe state.

Over 100 of them were abducted on February 19, 2018, but following negations between the terrorists and the Federal Government, they were subsequently released on March 21.

While parents of the girls and the nation at large celebrated their release, the government has come under attacks by the opposition over the circumstances surrounding the entire incident.

Some families have also been thrown into mourning following news of the death of five of the girls as a result of trauma from the abduction.

Meanwhile, another student has remained in captivity on grounds that she failed to denounce her faith as a Christian.

The Federal Government has, however, promised to do all it can to secure her release just like the others.

The same words of hope were given to the parents of Chibok girls who are yet to be released.

The girls, numbering over 200, were abducted in April 2014 from their school in Chibok town of Borno state.

Nearly four years after, the government has managed to secure the release of some of them in several batches while over 100 still remain in captivity.

While groups such as the Bring Back Our Girls (BBOG) have continued to be a strong voice in advocating for the release, many Nigerians have also called on the government to do everything they can, just as in the case of the Dapchi girls, to reunite them with their families.