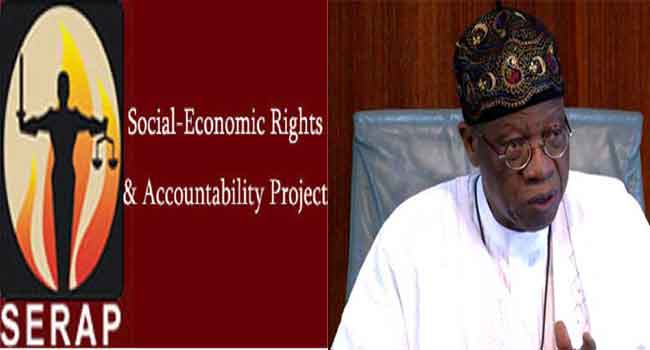 Socio-Economic Rights and Accountability Project (SERAP) on Sunday called on the Federal Government to withdraw the ‘looters list’ which was released last week.

The group, in a statement signed by its Director, Adetokunbo Mumuni, alleged that the Federal Government’s list is selective and therefore should immediately withdraw it and come up with a comprehensive list.

The Minister of Information and Culture, Lai Mohammed had on Friday released a list of some of those who have allegedly looted the nation’s treasury, a list which contains mostly PDP chieftains. SERAP said this list is political and can diminish President Muhammadu Buhari’s fight against corruption.

“The Federal Government should immediately withdraw the clumsy, arbitrary and selective looters’ list, released last week. The list would seem to serve a political objective or carry out political agenda.

“This kind of action can only diminish the government’s ability to fight corruption, allow suspected perpetrators, whether from the All Progressives Congress (APC) or the Peoples’ Democratic Party (PDP)to escape justice, and ultimately, deny victims of corruption justice and effective remedies. The authorities should withdraw the looters’ list and come up with a comprehensive list,” the statement read in part.

SERAP in the statement claims that allowing the published looters’ list to stand will undermine the credibility of the government’s corruption fight and signal to Nigerians that it is not serious to satisfactorily address the corruption allegations under the former President Goodluck Jonathan and involving those close to this government.

“This politicised list comes at a time when the government is promoting itself as a beacon of transparency and accountability, and a model for other African countries to follow. The authorities ought to have resisted the temptation to put out this shambolic list and instead obeyed the spirit and the letter of Justice Shagari judgment,” the statement read further.

SERAP said the Federal Government cannot pick and choose which judgments it wants to obey, even if the government would step on toes and make some politicians, whether in APC or PDP, uncomfortable.