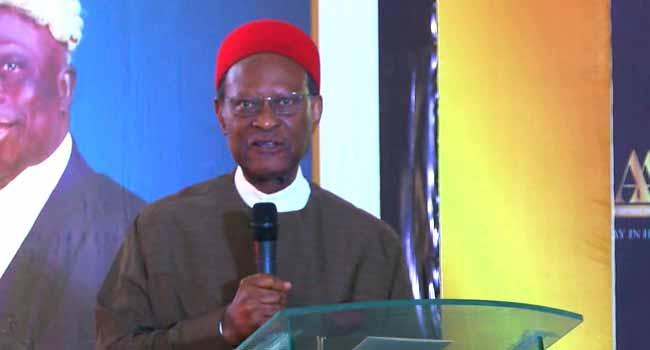 Former Secretary-General of the Commonwealth, Emeka Anyaoku on Tuesday reiterated the call for the restructuring of Nigeria saying Nigeria needs a true Federal structure.

Anyaoku said this at the launch of an autobiography of elder statesman, Chief Ayo Adebanjo in Lagos. He said he believes that Nigeria as a diverse country cannot succeed under a unitary system of governance.

“Our country, Nigeria, was doing extremely well when it had a true federation of four regions with each region developing at its own pace with citizens feeling proud to belong to the Nigerian country.

“I don’t believe there is anywhere in the world where a country with such diversity can live under a unitary government. So, we do need in Nigeria, a true Federal structure. This was one of the abiding thoughts that Chief Obafemi Awolowo advocated throughout his life,” Anyaoku said.

The elder stateman insisted that only a return to a true federal structure will ensure the full development of Nigeria’s potential.

Anyaoku said Nigeria a country with diverse culture and tradition cannot survive under a unitary government.

“I believe that if the military had not intervened in our governance in January 1966 and remained in power for so many years after that. If they had not disfigured our constitution.

“I do not believe that there is any country in the world that had the diversity that Nigeria has. The diversity of people who have lived for centuries in their geographic areas. Who had their distinct and diverse cultural traditions? I don’t believe there is anywhere in the world where a country with such diversity can live under a unitary government.”

Anyaoku had in August 2017 said the country is drifting towards a failed state due to the present structure of governance. He spoke then during a meeting with a group from Anambra State in the south-east of Nigeria and emphasised that there is an urgent need for restructuring the nation’s system of governance.

Chief Of Army Staff, Others Die In Kaduna Plane Crash

Gbajabiamila Not Against Southern Governors’ Calls For Restructuring – Reps