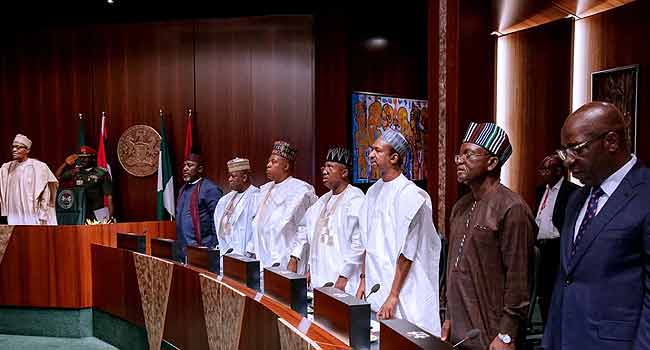 Governors of the All Progressives Congress have resolved to align with President Muhammadu Buhari regarding the tenure of party officials.

The Governor of Zamfara state who spoke on behalf of the governors said after several meetings of all APC governors and other stakeholders, they have resolved to respect the party’s constitution.

The President had on March 27, 2018, rejected the tenure extension for the All Progressives Congress (APC) National Chairman and other elected state officials.

The President told members of the National Executive Council (NEC) of the party in Abuja that the tenure elongation is illegal.

This comes one month after the NEC announced the elongation of the tenure of the party’s National Working Committee and other executives by one year, effective June this year.

The announcement had been made on February 27 during a NEC meeting attended by President Buhari, Vice President Yemi Osinbajo, APC Chairman John Oyegun and other party chieftains.

He explained that after due consultation, it became imperative to overturn the resolution to extend the NWC’s tenure as it contravened Article 17 Sub-section 1 of the Party constitution which recommends a 4-year tenure for all elected officials.

However, the party has said that it is set to conduct congresses at all levels with a committee already working to ensure a smooth exercise.

Meanwhile, the Imo State Governor, Rochas Okorocha has debunked rummors that the party is having crisis.