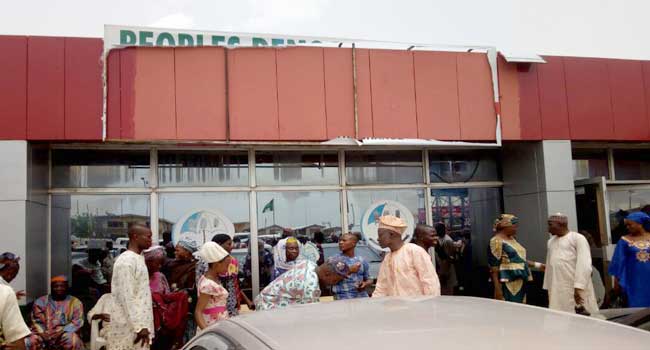 The crisis rocking the Peoples Democratic Party (PDP) in Osun state on Thursday took a surprising turn as some aggrieved members of the party burnt the party’s flag at the secretariat.

The action of the factional members is a fallout to the recent election and state Congresses held by the Adagunodo faction at the directive of the National Working Committee of the party.

Director-General of the Omisore Faction, Bade Falade claimed that the election which saw the emergence of Mr Soji Adagunodo as the state chairman was conducted illegally as there was a court injunction restraining the conduct of the congresses.

Due to this, the faction which is allegedly loyal to Senator Iyiola Omisore decided to express their grievance by burning the party’s flag and destroying the banner.

Falade told Channels Television that the aggrieved members decided to burn the PDP flag at the Ogooluwa secretariat to show their grouse towards the National working committee.

In his reaction, Osun State Chairman of the PDP, Soji Adagunodo, expressed surprise at the conduct of the party members in spite of several efforts being made by leaders of the party at the National and state levels to reconcile them.

He urged the members and supporters of the PDP in Osun state to remain calm and focused on the ultimate target of winning the next governorship election in the state.

There Is No Justice In Nigeria – Gumi

Wike Raises Alarm Over Alleged Recruitment Of Thugs For 2023 Polls

PDP To Go Ahead With Primaries As Scheduled For Sunday, May 22