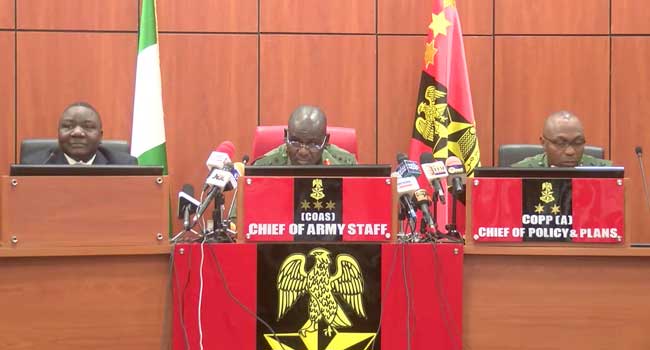 The Chief of Army Staff, Lieutenant General Tukur Buratai, has set up a committee to investigate claims of the Army’s complicity in the clashes between herdsmen and farmers in Taraba State.

Former Chief of Army Staff, Lieutenant General Theophilus Danjuma (retd) last month accused the Nigerian Armed Forces of complicity in the killings in Taraba, Benue and other “riverine states” in the country. Speaking during Taraba State University convocation, he alleged that the military was not neutral and was covering those behind the attacks.

General Buratai while setting up the committee on Monday said it was necessary to clear the reputation of the Nigerian Army, adding that such allegation cannot be ignored.

“Statements of this nature could damage the reputation of the armed forces of Nigeria and thus cannot be ignored if the Nigerians Army will continue to earn the trust of the Nigerian populace.

READ ALSO: Why Buhari Deserves To Be Re-elected In 2019 – APC

General Buratai added that the military is ready to take responsibility or blame if they were really found to collude as alleged.

Danjuma is an indigene of Taraba State which has is composed of various ethnic groups that have previously lived together peacefully until the recent attacks which had led to the death of many.